A few days ago, Georgia got word that a neighbor on the street below us had reported an uncommon bird in the area. Not rare exactly, but uncommon, one that had not been seen in the area for years. Then our next door neighbor told Georgia that it had been coming to her feeder regularly. Georgia even watched it using binoculars. She changed the food in her feeders, and added fresh suet and meal worms hoping to attract it. But after several days, nothing. She started to mutter about the ungrateful bird

But then yesterday it worked! She managed a few shots with the good camera, and this one came into good focus. 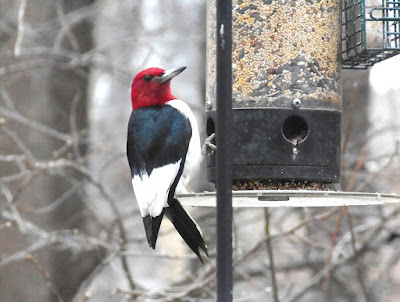 
The gorgeous Red-headed Woodpecker is so boldly patterned it’s been called a “flying checkerboard,” with an entirely crimson head, a snow-white body, and half white, half inky black wings. These birds don’t act quite like most other woodpeckers: they’re adept at catching insects in the air, and they eat lots of acorns and beech nuts, often hiding away extra food in tree crevices for later. This magnificent species has declined severely in the past half-century because of habitat loss and changes to its food supply.