Some selected articles on the shutdown, on the first day that salaried federal employees miss a paycheck. 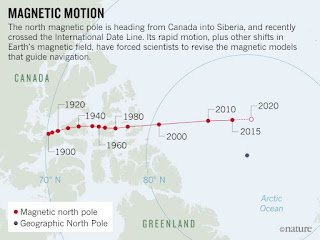 At Watt's Up With That Oh noes!!! Government Shutdown Imperils Earth’s Magnetic Field!!! No, not really, just a plaintive cry that government scientist will not be able release a report on the accelerating wobble of earth's magnetic pole due to the shutdown. Today's WaPoo is full of horror stories about federal workers having to sell their guitars to make ends meet.

From the Lid: Chuck Norris Backs Great Ted Cruz Idea To Fund Border Fence Use the money, over $14 billion, confiscated from El Chapo. If Obama can use federal fines for fund progressive NGOs, I don't see why not.

From Fox News: Build the wall and allow DACA recipients like me to stay in America, the only country I know and love. I'm OK with that.

Ace: Reggie Singh, Brother of Murdered Police Officer Ronil Singh: I Support the President's Efforts to Ensure That What Happened to My Brother Will Never Happen Again

Also Ace: CNN's "Republican" Analyst Pulls Out Her Nail File While Another Guest Is Talking About Americans Killed by Illegals, to Show She Doesn't Care

We have a winner
And by that I mean LOSER

The Left doesn't care if illegal aliens kill Americans#AnaNavarro proves this by filing her nails during a discussion of it pic.twitter.com/sen5yD9LDg
— Jim Hanson (@Uncle_Jimbo) January 10, 2019


Didn't she have some flossing to do?

Ace: Local Seattle News Director Placed on Leave After Allegations He Deliberately Distorted the Video of Trump's Speech to Make Him Look Crazy. "Enemy of the People. Shall we keep pretending otherwise?"

Fired! TV Editor Fired For Doctoring Video Of Trump’s Border Speech. He broke the 11th Commandment. He got caught.

At Townhall: Jim Acosta May Have Just Proved Trump's Point With This Video He Just Shared From the Border. Look, there are no illegals hopping over this section of wall!

I found some steel slats down on the border. But I don’t see anything resembling a national emergency situation.. at least not in the McAllen TX area of the border where Trump will be today. pic.twitter.com/KRoLdszLUu
— Jim Acosta (@Acosta) January 10, 2019


Does he stop to think about what he's doing? Jim Treacher: If the Dems Want to Lose the Wall Fight, All They Have to Do Is Keep Talking. Politico: Freshman Dems feeling the heat as shutdown drags on. Wait until the Federal workers figure out Congress could solve this by spending on $5 billion.

That was fast: Lindsey Graham Trying To Put Together Last-Ditch Deal To End The Shutdown to Lindsey Graham: There’s No Path To A Deal On The Wall In Congress. Time To Declare A National Emergency in 12 hours.

Jonathon Turley: Yes, Trump Has The Authority To Declare A National Emergency On The Southern Border. Rich Lowry: Don’t Declare a National Emergency for the Wall Maybe it's best not to give the liberal precedent to do it for gun control and climate. But maybe they'll do it anyway?