For two decades, scientists have been monitoring the streams that flow from Baltimore’s outer suburbs through some of the city’s most blighted neighborhoods on their way to the harbor.

With data painstakingly compiled from stream-sampling field trips and a network of continuously operating stream gauges, researchers involved in the Baltimore Ecosystem Study have new insights on how urban waters are polluted by sewage leaks and runoff from lawns and pavement. They’ve documented how pharmaceuticals and personal care products that wash down people’s drains are getting into the water and into insects, frogs and fish.

But they’ve also found that urban streams are surprisingly resilient — and that addressing their ills can help the long-running effort to restore the Chesapeake Bay while also improving the quality of life for city dwellers.

Now, though, the future of that research is in doubt. One of just two urban-focused long-term ecological research projects in the nation, the Baltimore Ecosystem Study faces what one of its chief scientists calls a “funding crisis.” The National Science Foundation, which has provided grants to underwrite the study since its inception, is pulling the plug on its financial support. 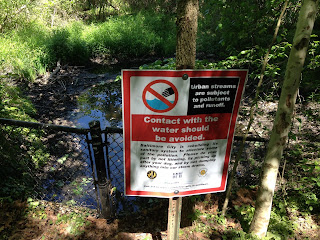 The science foundation notified study leaders earlier in 2018 that it had denied their request for another six-year grant, which would have provided about $1 million a year. Instead, the foundation offered the scientists a three-year grant to write up whatever results they have yet to publish, archive the data they’ve collected and decommission their field sites.

“It’s unclear why they were unhappy with us,” said Peter Groffman, a microbial ecologist at the City University of New York and one of the Baltimore study’s leaders. “The project’s been very productive. We’ve learned interesting things, so we’re a little befuddled.”

Doug Levey, an NSF program officer, said that the Baltimore ecosystem researchers “have done excellent work in the past.” But the foundation decided not to continue funding the project, he said, because of what he called “problems with the proposal” that the research team had submitted.

I'm of two minds on this. First, long-term research is valuable, and should be encouraged. But, NSF funding is highly sought after for new, cutting edge research, and this research is unlikely to be anything like that. Sure NOAA, EPA or even the state of Maryland would have an interest in keeping this research alive? God forbid Baltimore should pay to study it's own problems.
Posted by Fritz at 3:37 PM