Some Russiagate While We Wait Out the Snowstorm 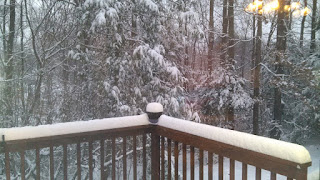 Winter Storm Gia, as the Weather Channel has named it, arrived in earnest around dark last night, after teasing us with a few flakes in mid afternoon. When I got up to put the coffee on this morning, it looks like about 8 inches of crystalline global warming on the deck, and the radar suggests it's not letting up any time soon. So, I've got the first cup of coffee in me, and it's time to deal with the accumulated Russiagate.

Repercussions of the New York Times article justifying the FBI opening an investigation of President Trump after the firing of FBI Director Comey continue. Twitchy has an interesting series of tweets from Byron York: ‘J. Edgar Hoover-style’: Byron York questions if the NYT article ‘is about Trump, or about FBI malfeasance?’

Investigation result: 'No evidence has emerged publicly that Mr. Trump was secretly in contact with or took direction from Russian government officials.' Is NYT story about Trump, or about FBI malfeasance? 4/4 End. https://t.co/L8U5rPbJup
— Byron York (@ByronYork) January 12, 2019


Lisa Page, a former top attorney at the FBI, told Congress she believed it was neither appropriate nor necessary for two of Hillary Clinton’s aides to accompany the former secretary of state in an interview she gave as part of the email investigation.

“I would agree with you that it is not typically appropriate or operationally necessary to have fact witnesses attend the interview,” Page told lawmakers during a closed-door interview in July 2018, highlights of which were published by The Epoch Times on Friday.

Page was answering questions about the FBI’s handling of the investigation into whether Clinton mishandled classified information by using a private email server while at the State Department. Clinton was interviewed by the FBI as part of the investigation on July 2, 2016, three days before then-FBI Director James Comey announced he would be recommending that Clinton be charged in the case.

Clinton was flanked by a team of attorneys in the interview, including Cheryl Mills and Heather Samuelson. Both lawyers were also witnesses in the FBI’s probe, having been interviewed multiple times separately by FBI agents about their handling of Clinton’s classified emails.

Read it all for some scary stuff. The DOJ was totally in the tank for Clinton, and the FBI only slightly less so from Page's perspective. At CTH, Sundance read the testimony, and focuses on how Leaked Lisa Page Testimonial Transcripts on CIA Brennan Angle, Confirms Likelihood of Dossier Origination….. Short answer, he thinks it helps establish that Nellie Ohr wrote most of the Steele Dossier while working for Fusion GPS, and alleges that she was illegally getting data from the NSA in the process. Read it all, and weep for our Republic.


Nellie Ohr was, is, and will always be, the factual author of the material inside the Steele Dossier. Notably Nellie Ohr refused to testify to the joint house committee citing spousal privilege as the excuse to avoid questioning.

Nellie Ohr, a CIA contract employee, is at the epicenter of the Steele Dossier; and as a result she is the person who created the basis for all of the FISA surveillance warrants that exploited the dossier for approval.

Was the FBI aware of Fusion GPS’s pro-Russia lobbying efforts and ties to Rinat Akhmetshin? Were they aware that Fusion’s lobbying efforts coincided with the creation of the Trump/Russia dossier?
Flashback —> https://t.co/sp4NNwYPix pic.twitter.com/amEOZWv3aW
— Nick Short (@PoliticalShort) January 12, 2019


OK, wow - the NY Times tells us that after Comey was fired the FBI complemented their criminal investigation of Trump with a counterintelligence probe. No reporting on whether the FBI sought, or found probable cause for, FISA warrants for folks other than Carter Page.

Why the revelation? Who knows? But a Trump-philic spin would be that Team Mueller is shifting the goalposts and trying to let The Resistance down gently. Note this deeply buried explanation of the two types of investigations:


The F.B.I. conducts two types of inquiries, criminal and counterintelligence investigations. Unlike criminal investigations, which are typically aimed at solving a crime and can result in arrests and convictions, counterintelligence inquiries are generally fact-finding missions to understand what a foreign power is doing and to stop any anti-American activity, like thefts of United States government secrets or covert efforts to influence policy. In most cases, the investigations are carried out quietly, sometimes for years. Often, they result in no arrests.

No arrests, no indictments, just a deeper understanding - well, that might cover the last two years. Hard news for The Resistance, if that is where this is headed.

NYPo:Trump rages about FBI’s reported probe into Comey firing as well he should.


“Wow, just learned in the Failing New York Times that the corrupt former leaders of the FBI, almost all fired or forced to leave the agency for some very bad reasons, opened up an investigation on me, for no reason & with no proof, after I fired Lyin’ James Comey, a total sleaze!” the president tweeted.

“Funny thing about James Comey,” he continued. “Everybody wanted him fired, Republican and Democrat alike. After the rigged & botched Crooked Hillary investigation, where she was interviewed on July 4th Weekend, not recorded or sworn in, and where she said she didn’t know anything (a lie).”

He gave The Post a shoutout in a subsequent tweet: “the FBI was in complete turmoil (see N.Y. Post) because of Comey’s poor leadership and the way he handled the Clinton mess (not to mention his usurpation of powers from the Justice Department). My firing of James Comey was a great day for America.”

The tweet echoed Trump’s April 2018 assertion — “I did you a great favor when I fired this guy” — at a rally in Michigan. “He was a Crooked Cop,” Saturday’s tweetstorm concluded, “who is being totally protected by his best friend, Bob Mueller, & the 13 Angry Democrats – leaking machines who have NO interest in going after the Real Collusion (and much more) by Crooked Hillary Clinton, her Campaign, and the Democratic National Committee. Just Watch!”

The Friday report in the Times said in addition to probing whether Trump was working for Moscow, the FBI investigation was meant to examine whether Comey’s firing amounted to obstruction of justice. Special Counsel Robert Mueller subsequently incorporated the probe into his own investigation, the Times reported.

The Washington Post resents that Trump has concealed details of his face-to-face encounters with Putin from senior officials in administration because they don't get any leaks that way.

CNN: Michael Cohen's big day may not be about Russia Of course it's not about Russia. It's about placing a frame around Trump for the non-crime of paying blackmail to Stormy Daniels and Karen McDougal. Speaking of which, Stormy Daniels, Avenatti To Attend Michael Cohen’s Congressional Testimony. No word on whether Stormy will pay for her seat by giving Elijah Cummings, Chairman of the Oversight Committee, a lap dance. Meanwhile, Judge Poised to Force Michael Avenatti to Open Books in Divorce Case - Stormy Daniels’ lawyer claims he has paid his ex-wife what he owes, but she says he's behind $1.7 million in child and spousal support. What a fine, upstanding Democrat!

The Washington Monthly: The House Foreign Affairs Committee Will Aggressively Investigate Trump. I guess that means Trump has ended the threat from terrorisn, right?

Picked up by Pirate's Cove as the Blog Post of the Day in If All You See… . Thanks Teach! (She's lovely isn't she?)
Posted by Fritz at 9:20 AM