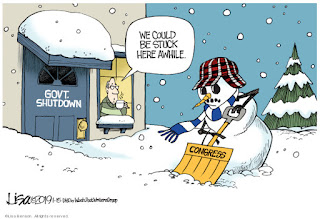 Well, so where were we? The partial shutdown in now in its 26th day as Trump and lawmakers paralyzed over shutdown as both sides remain dug in. Man, those House Democrats must really hate Federal workers, considering they could solve it today for only $5.7 billion, about 0.1% of the budget! Pawn Shop Owner Says He Sees 10-20 Federal Employees Every Day During Shutdown even though they missed their first paycheck less than a week ago. Maybe I should check the local pawn shop for a guitar or even a PA. Matthew Walter at Da Week: America's shutdown indifference


I have two memories of the federal government shutdown of 2013. One is not actually mine but my wife's. At the time she was employed as a waitress at a restaurant in the Clarendon neighborhood of Arlington, Virginia. During those 16 days she waited on hundreds of furloughed government employees, in many cases during what would otherwise have been their ordinary working hours.

The vast majority of these public servants left no tips regardless of the size of their bills, some of which were substantial. Many of them instead wrote notes politely explaining that they wished they could contribute a gratuity but given the circumstances they were sure everyone would understand. Perhaps they were under the impression that my wife and her co-workers, most of whom were African-American women who had made the long commute from over the river in Anacostia in order to serve novelty drinks and gigantic appetizer platters to these selfless officials, had Ted Cruz's cell number and could bring the whole thing to a halt if they so chose. Or maybe they were just being the lazy, entitled, self-aggrandizing make-work goons millions of Americans imagine them as.

The other memory, which is less horrifying but even more ludicrous, is of barriers being erected around various D.C.-area landmarks, including open-air war memorials. To this day I cannot think of any good reason for this save sheer caprice. If the idea was that 550-foot obelisks made of granite simply could not be meaningfully serviced during those lean two weeks in 2013, then who was responsible for putting up the rent-a-fence barricades around them? Civic-minded volunteers? The U.S. Marine Corps? Barack Obama himself? It was beautifully cynical, and I congratulate whoever came up with it.

By and large, Federal workers have only minimal sympathy for the negative affects many of their jobs have on the country's workers and the cost of their "services." Why should they expect more in return.

At Da Hill: Democrats turn down White House invitation for shutdown talks. That was yesterday, Today?  Breaking: Pelosi Asks Trump To Postpone SOTU Until Gov’t Reopens; Update: Dems Planned Move For “Months”? Trump should say fine. I'll do the address televised from the Oval Office, and put it on Twitter.  That should fulfill the constitutional requirement:


He shall from time to time give to Congress information of the State of the Union and recommend to their Consideration such measures as he shall judge necessary and expedient. 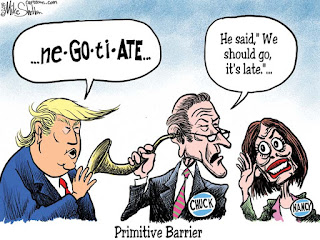 Da Hill: Coast Guard commandant confirms missed pay checks in letter to members, which is bad, because I really support the coasties. They should be moved into the DOD. But this is good: USAA donates $15 million to Coast Guard families

“I am grateful for the outpouring of support across the country, particularly in local communities, for our men and women,” Schultz wrote Tuesday in a letter posted to Twitter. “It is a direct reflection of the American public’s sentiment towards their United States Coast Guard; they recognize the sacrifice that you and your family make in service to your country. It is also not lost on me that our dedicated civilians are already adjusting to a missed paycheck — we are confronting this challenge together.”

The donated funds will disburse as interest-free loans to Coast Guard personnel with the assistance of the American Red Cross, according to a news release from USAA. Beginning Wednesday, Coast Guard servicemembers with dependents will be eligible for interest-free loans up to $1,000, while servicemembers without dependents will be eligible for up to $750.

AP: No. of no-show airport security screeners soars in shutdown. What, nobody is lining up to donate to the TSA screeners? I'm shocked!

WaPoo: The shutdown is giving some Trump advisers what they’ve long wanted: A smaller government but not forever, alas.


The shutdown is “a means to an end for something they have long pursued, which is limiting the size and scope and role of government,” former House GOP staffer Kurt Bardella said of the conservative Freedom Caucus. Bardella became a Democrat in 2017.

“These are small-government guys, not wall guys,” one former White House official, who spoke on the condition of anonymity to discuss private exchanges, said of Meadows and Jordan.

But maybe . . . Should federal workers walk off the job? (Helaine Olen at WaPoo). Just do it!


Only senior officials are at work in many departments, which means #TheResistance of do-nothing bureaucrats -- who are actually doing something under Trump, to wit, subverting and sabotaging his orders -- aren't present.

Althouse: "The shutdown has in some ways underscored [some conservatives'] view that government can function with fewer employees."


"'There’s a moment when people say, "Did you notice what percentage of this agency was viewed as nonessential?"' said anti-tax activist Grover Norquist. Former White House chief strategist Stephen K. Bannon called shutdowns 'blunt-force measures that certainly show what’s essential and what’s not.'... The shutdown follows two years of contraction of the federal workforce under Trump. During his first 18 months in office, the government shrank by 17,000 employees...."

From "The shutdown is giving some Trump advisers what they’ve long wanted: A smaller government" (WaPo).

What's not to Love (Insty) "IRS Says It Will Issue Tax Refunds, But Not Audit, During the Shutdown. WSJ paywall, but the headline says it all." Roger L. Simon: May the Shutdown Go On Forever

Daniel Horowitz at the Conservative Review asks a serious question: Why is the main harm of a long shutdown the pay of the workers and not the actual work? Because then people would start to question what the workers are doing for them, instead of what they're doing to them.

At the Daily Mail: Federal judge REFUSES to make Trump pay federal employees who say they're SLAVES working for free during shutdown – and won't intervene in 'squabble' that he calls a 'political problem'. They can always quit. Jazz Shaw at Hot Air:  When Big Brother Forces You To Work Without Pay

This normally doesn’t turn into much of an issue because shutdowns have never lasted this long. Given that we’re now well over three weeks into this one with no end in sight, it’s high time to address something fundamentally wrong with our policies regarding public sector employees and the impact federal government shutdowns have on them.
First of all, I’d like to point out that this question has nothing to do with politics, or at least it shouldn’t. It doesn’t matter whether you’re a Republican, Democrat or independent. You can support the wall or oppose it, love the President or hate him. This is a basic question of human decency fundamental rights.

We have people at the TSA and air traffic controllers at our nation’s airports (among others) who are being told they have to continue showing up for work and are getting paychecks worth precisely zero dollars. It’s true that each of these workers will have all of their pay restored to them when they eventually return to work, but that’s not the issue here. When you tell American citizens that they have no choice but to show up for work and then you don’t pay them, that practice is virtually indistinguishable from slavery.

I’m not talking about workers who have been furloughed. Whether you’re in the public or private sector, there are times when you may be let go from your job, either permanently or temporarily. That’s a reality that all employees face and the government workers deserve no special protection that private sector employees don’t receive. (For that matter, I remain unsure why furloughed workers should immediately have their pay restored for time not worked.)

But if the government is allowed to tell workers that their jobs are “too valuable” or “too critical” to have them stay home, the workers should have an easy answer. If that’s the case, then we are too valuable for you not to pay us. The United States government currently runs on a policy where they are allowed to take thousands of workers and temporarily turn them into the equivalent of indentured servants. This policy should be changed as soon as Congress manages to get off its butt and return to work.

I have several friends who are in this position. They have to go to work (or quit), and they won't get paid at least until this is over. IMHO, agencies should forced to decide ahead of time how many "essential" workers they have, identify them if necessary, and set aside money to support these people long enough for a 6 week (or more) shut down. 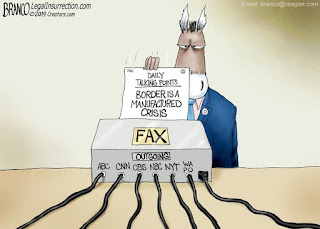 Byron York: In border fight, Democrats want 'technological wall' that won't keep anybody out. Why would they want to keep their prospective voters out?


That is especially important given the nature of the migrants crossing the border illegally today. In the past, many were single adult men who could be caught and quickly returned to Mexico. But now, according to the Department of Homeland Security, about two-thirds of the crossers are families and unaccompanied children who, by U.S. law, cannot be quickly returned. Once in the United States, their asylum claims — the vast majority are ultimately judged without merit — take a long time to process. During that time, many simply disappear into the country.

The point, for those illegal immigrants, is not to enter the United States without being detected. It is to enter, be caught, and begin the asylum process that will allow them to stay, one way or the other.

A smart wall is no obstacle to such crossers. On the other hand, a physical barrier would be a big obstacle and, if placed in key areas of the border, would likely reduce illegal crossings significantly. That is precisely the kind of barrier that Pelosi, Clyburn, and other Democrats oppose.


Democrats and others on the left offer three reasons for their opposition to building a wall on America's southern border. 1. A wall is ineffective. 2. A wall is too expensive.3. A wall is immoral.

Each one is false, so false as to constitute lies. So, the only question is: Do Democrats and others on the left believe these lies? . . .

But saving the worst for last: The Jolt: Johnny Isakson worries shutdown could threaten Super Bowl


“We’ve got a Super Bowl coming to Atlanta, Ga., in about three weeks. The biggest tourism event in the world this year. What if the largest airport in the world, that’s going to bring people to the largest football game in the world, goes out of business because the TSA strikes?” Isakson asked. “Then you’ve just cost millions of dollars to the United States of America, my home city of Atlanta and others.”

According to Government Executive magazine, Isakson is one of eight GOP senators who have signed onto a measure U.S. Sen. Rob Portman is advancing to avoid government shutdowns in the future.

The bill stipulates that, if Congress fails to meet a funding deadline, a continuing resolution would automatically kick in, maintaining spending levels at the current rate.

Government shutdowns are necessary to make any progress.
Posted by Fritz at 4:40 PM