What Whitaker said is alarming. He saw a chance to add pressure on Mueller to get it over with, after the Stone indictment suggested how dangerous the probe is to Trump if allowed to run unimpeded. And he tried to normalize the idea of higher-ups messing with Mueller’s findings.
— Bill Kristol (@BillKristol) January 29, 2019

Sen. Coons says it’s “chilling” to hear Matt Whitaker say there would be a review of Mueller report

“I don’t have full confidence that the acting attorney general Whitaker intends to respect the independence of the special counsel and simply support and sustain“ Mueller report
— Manu Raju (@mkraju) January 28, 2019


The Mueller probe will end at the closely coordinated and pre-selected time when Mueller hands off his investigation to Elijah Cummings (WH oversight), Adam Schiff (HPSCI), and Jerry Nadler (Judiciary). That timing looks to be around the end of February if current congressional witness schedules remain unchanged.

Chris Christie Doesn’t Think Mueller is ‘Almost Done’: ‘I Don’t Think He is Ending on Roger Stone’ from Mediaite. I think an unwritten agreement between Bob and Rod is to keep the investigation alive until after the 2020 election by hook or by crook. Is Bill Barr in on it? Da Caller, AG Nominee Says He’d Resign If Ordered to Fire Mueller ‘Without Good Cause’. Howie Carr at the Boston Herald reminds us that Mueller gave us good cause years ago, Mueller’s hands dirty in old FBI frame-up.

If the mandate given to Robert Mueller was to specifically investigate the sitting president of the United States as an active participant, and subsequent target, for a counterintelligence operation, then DAG Rod Rosenstein -and Mueller- would have tohide that mandate from everyone and anyone.

More specifically, Rosenstein would NEVER be able to honestly discuss the Mueller probe with President Trump; because President Trump would be the primary target within the investigation. And that changes EVERYTHING.

Now, at first blush this likelihood might sound disingenuous, but if you think about the downstream ramifications; and then contrast those ramifications against what we know has factually taken place; then things make a lot more sense.

Ace, Washington Post Poll: Most Americans Don't Support Impeachment, Most Have "Some or No" Confidence in Mueller's Fairness, "This poll just kicked a lot of sand into a lot of vaginas." 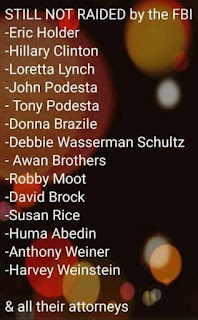 WaPoo, Trump confidant Roger Stone pleads not guilty to charges in Mueller probe, as expected.  Da Caller, Roger Stone Claims Donald Trump Never Talked To Him About Wikileaks. Seems unlikely. Neither of them seems to be the type to shut up about anything. James S. Robbins at USA Today,  Roger Stone's not guilty plea shows collapse of Russian collusion narrative


Regardless of where the emails came from, once WikiLeaks began to publish them, everyone in America wanted to know what was in them, no doubt especially the Trump team. Roger Stone was simply conducting his version of opposition research, albeit ineptly. And the indictment notes that Stone was “claiming both publicly and privately” to be in contact with WikiLeaks during the 2016 campaign, so if he were trying to keep his activities a secret he was doing a poor job.
. . .
What this story indicates is that the Trump campaign didn't have close ties to WikiLeaks, and no knowledge about what was in the emails, which presumably it would have if there were collusion afoot. And though investigations have found 100 contacts between members of the Trump circle and a variety of Russians during the 2016 campaign, none of the reported communications offers clear evidence of election tampering, quid pro quos, prior knowledge of dirty tricks, or anything else that would confirm the collusion narrative. 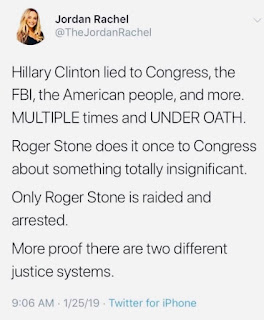 The collusion story was a speculative proposition from the start. It apparently originated with former CIA Director John Brennan, who testified to Congress about his concerns that Russian agents might try to suborn members of the Trump team during the 2016 campaign, based on tips from foreign intelligence services. But rather than warning a major-party presidential candidate that he was a target of a foreign influence operation — which you would expect from a supposedly nonpartisan career intelligence official — Brennan established an interagency task force that targeted Trump’s circle. And while Brennan has more recently called President Donald Trump’s denial of collusion “hogwash,” he still cannot produce evidence to support the charge. If the Trump administration would declassify documents related to the activities of Brennan’s group during the campaign, the public might gain more insight into who was colluding against whom.

If wanting Clinton's emails is criminal, lock us up

At Theo's Rico tells us The 'Rule of Law' is dead. Not quite yet, but it may be on life support.
Posted by Fritz at 9:18 AM