The Reign of Pain Just Got Real

Just as the snowflakes (the real ones, not the millennials) started to fall in Washington, threatening to shut what's left of the city down, the moment came when 30% of federal employees missed their first pay check. AP:  Federal workers get $0 pay stubs as shutdown drags on. Note that the "shutdown" has now been going on 22 days, and they are just starting to miss pay. From the Washington Post coverage you'd think they all had kwashiorkor.  Quin Hillyer at WaEx, It’s absurd to pay federal workers for jobs not being done, as all but 7 House Republicans voted to give back pay to furloughed workers when the the shutdown ends. Why? It's not like they'll show any gratitude. Hot Air: Trent Lott On Government Shutdown: “It’s All Bulls**T”. Michael Barone: A shutdown stalemate as Trump goes factual, Democrats illogical. Democrats illogical? Do Tell! CBS: Trump floats "path to citizenship" for H-1B visa holders

Reuters, Trump says not in a rush to declare emergency in border wall fight. Politico: White House warns shutdown could carry on after emergency declaration - Trump may tap his emergency powers without reopening the government, a move some allies say could 'screw' Democrats. CNN's Jeffrey Toobin thinks Trump can fund the wall by declaring a national emergency. Fox News' Andrew Napolitano is skeptical. When legal experts differ, do it, and let the courts sort it out later. Pat Buchanan agrees. Memo to Trump: Declare an emergency. WSJ editors, Trump’s Presidential Emergency - He probably has the legal authority, but it’s still a bad precedent Probably true, but the Democrats would do it if it were their turn. In fact, Obama did. USA Today: Pentagon prepares options to build border wall as Trump weighs emergency declaration. They have plans for making plans. AP, GOP lawmakers sure disaster funds will not be used for wall. Maybe.

The media continues to cover itself with shame. Red State, Something Was Strangely Missing From Media Coverage Of Trump’s Border Security Address. Whet do the polls show? If it were bad for Trump it would be a lead story.

KUSI anchors revealed on air that CNN requested, then declined, to use their border reporter after finding out his coverage of a broadly successful San Diego border barrier didn't match their preferred narrative. CNN pushing back on this embarrassing public revelation. https://t.co/YuuwCWVS93
— Mollie (@MZHemingway) January 11, 2019 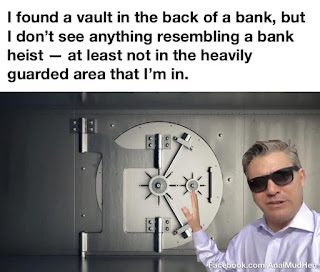 Ann Coulter: MEDIA THROW EVERYTHING AT THE WALL TO SEE WHAT STICKS. And what they mostly throw is shit. AllahPundit: Trump To Acosta: Thanks For Your Salesmanship On Behalf Of The Wall Yesterday At The Border. Joshua trees cut down, desert vandalized at Joshua Tree National Park during government shutdown. Unmentioned until well down in the article was that staff were back at the park when the damage happened. Frontpage: How No Border Wall Caused a Homeless Crisis 2,500 Miles Away in Maine


Portland shelters, 2,500 miles away, are overloaded by illegal migrants from sub-Saharan Africa who crossed the border and then kept right on going to one of the coldest, but most profitable parts of the country. Portland, like many areas in Maine, attracted migrants because of the generous social safety net that had been set up to help the local population deal with turbulent economic times.

What you subsidize, you get more of.
Posted by Fritz at 3:21 PM