Covering an area roughly equivalent to the British Isles or the State of New Mexico, Tamu Massif is nearly as big as the giant volcanoes of Mars, placing it among the largest in the solar system
...
Located about 1,000 miles east of Japan, Tamu Massif is the largest feature of Shatsky Rise, an underwater mountain range formed 145-130 million years ago by the eruption of several underwater volcanoes. 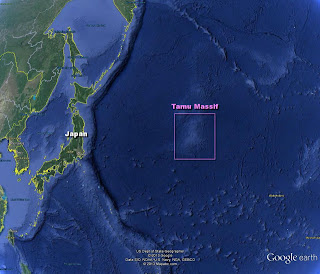 That puts it at just about the Jurassic/Cretaceous boundary.  Something else for the dinosaurs to have worried about

Until now, it was unclear whether Tamu Massif was a single volcano, or a composite of many eruption points.

By integrating several sources of evidence, including core samples and data collected on board the JOIDES Resolution, scientists have confirmed that the mass of basalt that constitutes Tamu Massif did indeed erupt from a single source near the center. The results appear today in a paper in the journal Nature Geoscience.

“Tamu Massif is the biggest single shield volcano ever discovered on Earth,” says lead paper author Will Sager of the University of Houston. “There may be larger volcanoes, because there are bigger igneous features out there such as the Ontong Java Plateau. But we don’t know if these features are one volcano or complexes of volcanoes.” 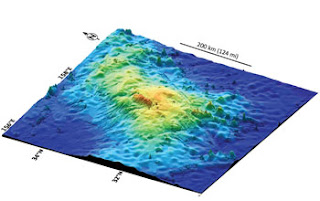 So it's the largest volcano on earth, unless we find another bigger one that's been hiding.  Ain't science grand?

Tamu Massif covers an area of about 120,000 square miles.

By comparison, Hawaii’s Mauna Loa–the largest active volcano on Earth–is a mere 2,000 square miles, or less than 2 percent the size of Tamu Massif.

To find a worthy comparison, one must look skyward to the planet Mars, home to Olympus Mons. That giant volcano, which is visible on a clear night with a good backyard telescope, is only about 25 percent larger by volume than Tamu Massif.

It does not appear that the volcano is active now or has been in the geologically recent past, which is likely a good thing, as that much volcanic activity in a short period would surely have  deleterious consequences on the earth's atmosphere and climate.

Seen at Watts Up With That.