Dog Day at the Beach 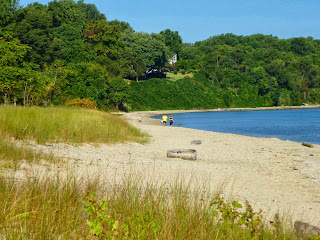 Another lovely sunny fallish day at the beach.  Temperatures were in the mid 60s, with negligible humidity and wind. 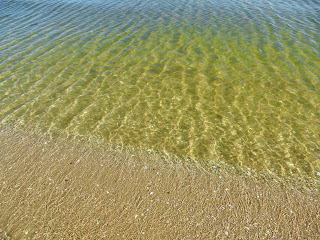 The water is extremely clear now, after the summer "gunk" is gone.  Why?  I'm not sure exactly, but I think the summers growth of filter feeding organism, and the slower growth of algae as days get shorter, the sun angle gets lower, and the water starts to cool (just a little; it's still quite warm).  I wouldn't declare the Sea Nettle season over just yet, but I haven't seen many. 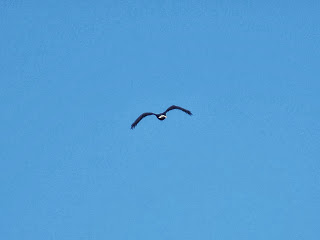 The eagles are still around (and yes, I expect them all year, I just wonder when the juveniles move out), but no Ospreys today.  Are they moving and thinning out? 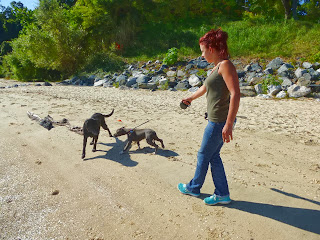 We met this young woman with a little puppy, Lucca, and we stopped to let Red play while Joel dispensed some advice.  It was a cute "blue" Staffordshire Terrier (informally called Bull Terriers). 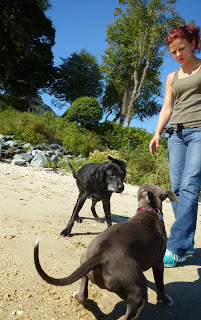 Unlike many, was very dog friendly, and with Red as a lure, it got its first taste of freedom on the beach 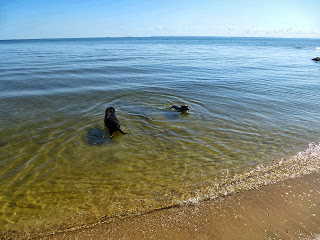 It was fun to see it take it's first swim.  Red went out into the water, and Lucca wanted to play, and after a little dancing at the water line, it jumped in and waded out to where it had to swim.
Posted by Fritz at 5:43 PM