Venetians Take to the Canals to Protest Cruise Ships

Around 50 protesters dressed in wetsuits, backed by 1,000 supporters, managed to hold up the cruise ships by over an hour as they paddled in the canal – some armed with inflatable rings.

The protest was timed to coincide with a busy day on the canal, as a scheduling quirk meant 12 cruise ships were due to head past St Mark's Square – well above the daily average of two ships
...
Cruise ship operators claim the ships create little damage to Venice's fragile palazzi and no pollution, while local fears over safety have been spurred by the grounding of the Costa Concordia cruise ship on the island of Giglio last year and the more recent ramming of an observation tower at the port of Genoa by a cargo ship, killing seven.

Defenders of the ships say 5,000 local families are supported by the jobs guaranteed by the traffic, while protesters counter that the city's character is being crushed by the daily wave of tourists who disembark, buy a souvenir and then leave. On Saturday an estimated 35,000 cruise ship tourists arrived, equal to over half the city's population. 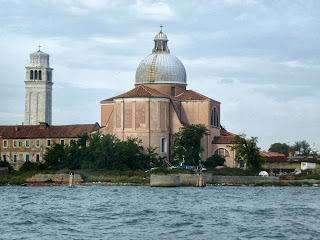 Venice was certainly one of the highlights of our visit to Italy, a little over a year ago now.  Yep, the place was packed with tourists, and tourism seemed to be the main industry.

Venice itself is the descendant of a fiercely competitive Medieval and Renaissance nation state, one of the main sea powers of the day, and a great trading center.  It's hard to imagine it's founders sneering at rich people who would want to travel to Venice, see it great art and buildings and enjoy it's culture, dropping heaps of money along the way.

Everyone should also visit the Doge's Palace and the Bridge of Sighs to understand the role of checks and balances in governments.