The Internal Revenue Service (IRS) has offered election integrity group True The Vote its tax-exempt status in what appears to be a bid to keep the group from proceeding with discovery on its lawsuit against the agency, Breitbart News has learned exclusively.
...
In July 2010, True The Vote filed an application with the IRS seeking 501(c)3 tax exempt status. After discovering in May 2013 that its application was part of the bigger IRS scandal targeting Tea Party organizations, True The Vote filed a lawsuit in federal district court in Washington, D.C. requesting that its tax-exempt status application be approved.

The IRS granted the tax-exempt status on Friday night and then filed a motion to dismiss the lawsuit all in the same document. True The Vote is accepting the tax-exempt status, but will file a counter motion to continue fighting the other counts of the lawsuit against the IRS. Those other counts deal with civil rights and privacy issues and could lead to the IRS being forced to turn over more documents heading into full discovery.

By moving to offer True the Vote their tax exempt status, The IRS has effectively admitted to having put it's fingers on the scale in the last election, by interfering with the ability of conservative groups to raise money to raise the issue of voter fraud and effect changes to minimize it.

The comment that the move  "appears to be a bid to keep the group from proceeding with discovery on its lawsuit against the agency" seems like well founded speculation, given the IRS's extreme reluctance to release information to its direct overseers, Congress. 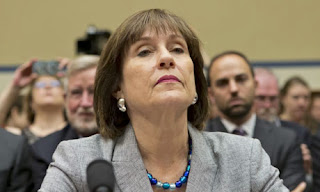 Speaking of releasing information on the IRS scandal, Lois Lerner, head of the IRS tax exempt office who refused to testify to Congress after swearing her innocence, has stopped sucking salary resigned from the IRS.


Facing a possible firing, the Internal Revenue Service official at the center of the agency's tea party scandal retired Monday, ending one chapter in a scandal that has engulfed the tax-collection agency since spring.

Lois Lerner headed the IRS division that handles applications for tax-exempt status when she was placed on paid leave in May. While she was in charge, the agency acknowledged that agents improperly targeted tea party groups for extra scrutiny when they applied for tax-exempt status during the 2010 and 2012 elections.
...
A day after the hearing she was placed on paid leave at the age of 62.

Apparently, Issa is down to hypothesis #2, the scarier of the two hypotheses on how the IRS came to target conservative organizations seeking tax exempt status:
The first is easy to fix; impeach the President.  The second is more difficult, because the bias is built in, and activated without specific directions.  I stand by my "Modest Proposal."
Posted by Fritz at 6:15 PM