Megan McArdle, an economist at Bloomberg, and one of Instapundit's favorite links deals with a recent meme, that the plot of "Breaking Bad" would not work in Canada because of their socialized medical system:

I first came across this meme a few days ago, from someone in my Facebook feed. The joke, for those of you who don’t watch "Breaking Bad" (or are merely a bit thick), is that the show wouldn’t make sense in Canada, because Canada has a comprehensive national health-care system. Thus the rationale for the launch of a mild-mannered chemistry teacher into the world of meth-cookery -- his cancer diagnosis and need for treatment -- wouldn’t make sense. 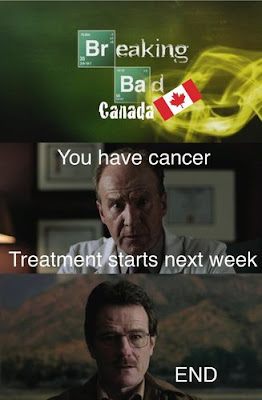 We haven't gotten into "BB"; it really doesn't sound like Georgia's cup of tea.  However, now that it is on schedule to reach an ending of the plot, I may have to start.


The series starts with Walter White, a high school chemistry teacher in Albuquerque, New Mexico, who is diagnosed with lung cancer. His lousy health maintenance organization won’t cover a decent doctor, or treatment. So Walter is forced to turn to crime just to pay his medical bills and … whoa, wait a minute. You know who has excellent benefits, compared with basically everyone else in the country? Teachers, firefighters and cops. Maybe they’re overworked and underpaid, but the one thing that you cannot say about them is that they’re forced to endure shoestring health-care plans. According to the Internet, Albuquerque school district employees are eligible for
Medical, Dental, Vision, Basic and Additional Life Insurance, Long Term Disability, Pre-tax Insurance Premium Plan (PIPP), Flexible Spending Accounts, Long Term Care Insurance, 403(b) and the 457(b) Deferred Compensation Plans.

That’s a generous package. Moreover, the Albuquerque school district self-insures, so any complaints about benefit levels should be directed at the city government, not your “lousy HMO.”

So there goes the meme from the very start.  The media had a message to project, and it didn't need the facts to get in the way.  But it continues:


Later, after Walt’s actions accidentally result in the shooting of his brother-in-law, a Drug Enforcement Agency agent, Walt's wife takes a bunch of the meth money to pay for Hank’s treatment. On his government salary, Hank can’t possibly afford the treatment he needs, because, of course, his lousy insurance policy won’t cover more than a few visits to the physical therapist … and whoa, we just went from “unrealistic” to “ludicrous.” You know who has even better benefits than employees enjoying a compensation package collectively bargained with a local government? Federal employees in a low-cost state such as New Mexico. Moreover, extra benefits are available to people injured in the line of duty.

In short, a number of key plot points hinge on the improbable assertion that people who actually enjoy some of the best health insurance in the country actually suffer some of the worst -- so bad that we are expected to believe that Walt had no choice but to cook meth to cover the gaps. For an otherwise great show, this is incredibly silly.

But would Walt have received the prompt diagnosis of his disease and quick and effective treatment of his cancer?  Maybe, but the Canadian health care system is plagued with long wait times, and many Canadians unable to get good or timely treatment in Canada come to the United States, where they are free to spend their own money on health care.

So here's how the "Breaking Bad" would go in Canada:

Walt has cancer.
Walt is wait listed for two years to receive treatment (or denied it altogether a lost cause).
Walt makes meth to fund private treatment in the United States.