The last Swallowtail project update was Thursday.  Since then the caterpillar started to grow at a tremendous rate, forcing us to go get more parsley to feed it.  Then abruptly, yesterday morning it's behavior changed.  It stopped eating, and started running all over the fish bowl.  Apparently, prior to the metamorphosis to a chrysalis, the caterpillar develops a strong "urge" to seek out a better, maybe safer place to spend its time changing to a butterfly.

We had put some dill stalks in, hoping it would select those to settle on, but instead, it picked a spot on the outside of the fishbowl last night: 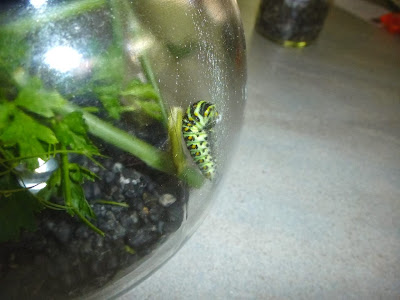 You can see the web of silk from the head and tail where the caterpillar attached itself to the glass.  Hopefully sometime in the next day or so it will moult once more to become the chrysalis. Someone else caught this neat video of the process: