I'll Drink to That, If I Remember 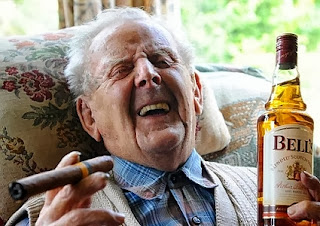 Alcohol found to improve memory in most elderly people

A glass of wine every day could be the secret to keeping a brighter mind in old age.

Moderate drinking was found to improve memory and learning skills in a long-term study of elderly people.

The research claims that the benefits only begin to emerge after middle age. 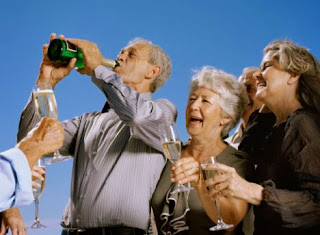 Kind of like Cliff's theory about brain cells, do the benefits of alcohol emerge only after it kills off the weak young people?

But it doesn't apply to everyone.

While about 80 per cent of pensioners will do better with a drink, an unlucky 20 per cent will not.

In fact, a regular drink will put this group’s cognitive abilities into reverse because their DNA includes a gene called APOE e4, which is linked to Alzheimer’s disease.

The study, published in the journal Alcohol And Alcoholism, states: ‘Light and moderate alcohol consumption during late life was associated with greater decline in learning and memory among APOE e4 carriers.

But, in the absence of a test for APOE e4, why take chances?