Scott Rasmussen polled voters on whom they trust, and found that voters prefer Republicans over Democrats on ten of fifteen numbers. Not only that, the issues where voters trust the GOP more than Democrats are generally the most important ones: the economy (by seven points), national security (15 points), taxes (seven points) and spending (21 points). Here is the complete list: 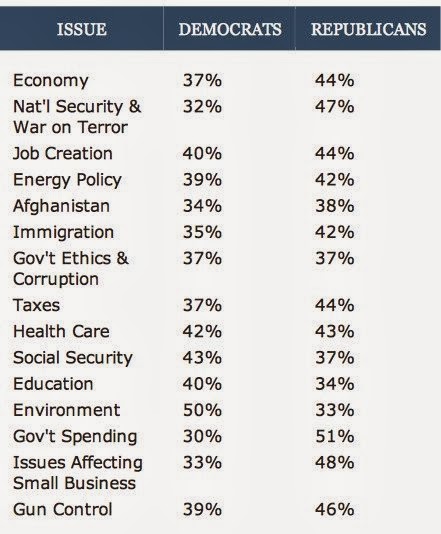 The answer, of course, is the media, which almost uniformly (with the possible exception of Fox, and I'm not so sure about Shep Smith), holds and pushes the minority position.  Moreover, they never fails to portray Republicans in the worst possible light.  Remember John McCain's transformation from the media favored "maverick" during most of the Bush administration, to the old fuddy duddy extreme conservative during his election run, and back to the media's favorite Republican after he lost, and began picking Republican nits again?

The old media is dying, but not fast enough.
Posted by Fritz at 11:00 AM