A few days ago, Georgia went over to Charlie's house and stole picked some parsley.  She set it in a small glass in the window to keep it fresh.

Yesterday, she noticed some little black turds, and a tiny black caterpillar with some yellow spikes on it.  She recognized it as the caterpillar of the Black Swallowtail Butterfly, so we decided to keep it and raise it up.  We found an old fish bowl with some black gravel that wasn't being used, and set it up with a little bottle to hold water with some parsley, and voila!, our caterpillar habitat: 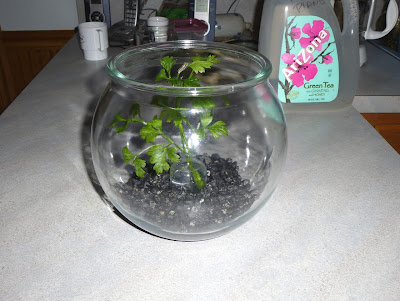 It didn't seem to move much yesterday, after eating a couple leaves in the morning, but by this morning it had shed it's skin, and become something more like the classic Black Swallowtail caterpillar, with black, yellow and green markings: 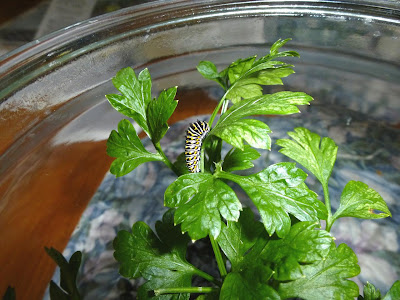 As it grows, we'll probably have go get more and more parsley from Charlie, or we can use some dill or fennel from our garden.  The caterpillars of the Black Swallowtail eat only a few species of aromatic herbs related to the carrots.  Here's a larger caterpillar I found at SERC a few days ago on a Dill plant: 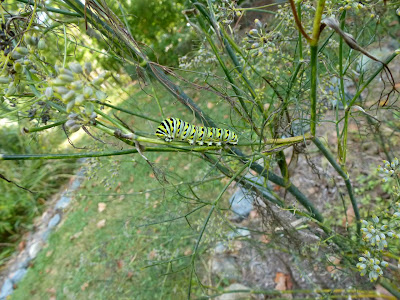 After it reaches full size, it will form a chrysalis, the resting form where they metamorphose from a caterpillar to a butterfly.  Here's on I found on Dill in our garden earlier this year.  Unfortunately, it disappeared a few days after we found it; we presume a bird found it: 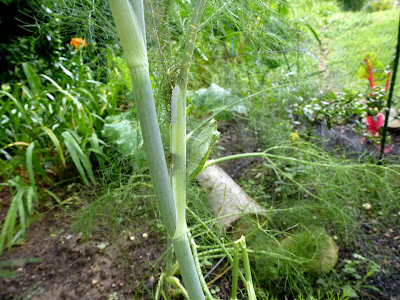 After metamorphosing, a  beautiful Black Swallowtail will emerge.  As late in the season as this is, may have to hold it over the winter.  The Black Swallowtail has 1-2 "flights" in the northern part of its range, and 3 in the southern.  It's not clear what part of the range we are in.  However, the late chrysalises hibernate, and produce the springs first butterflies.  The big question is, if we succeed, will it be a male... 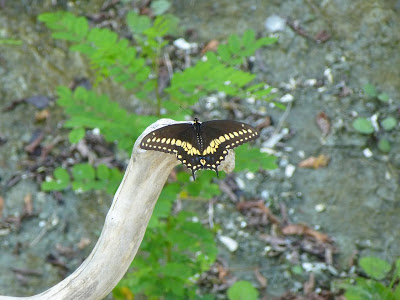 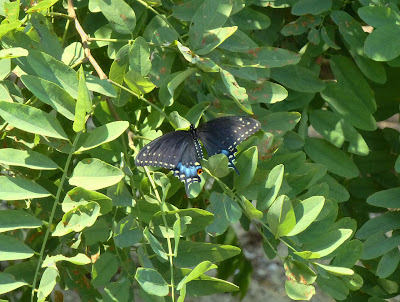 Email ThisBlogThis!Share to TwitterShare to FacebookShare to Pinterest
Labels: butterflies, Georgia, Me