Naval Yard Shooting - The Day After 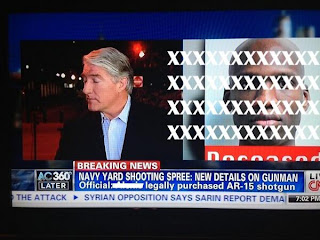 There never was a second shooter.  Aaron Alexis acted alone.  The confusion is understandable, given a large number of armed men converging on the scene in minutes after the first shot were fired.

Alexis brought a recently purchased, Vice President Biden approved shotgun to the scene, and took a handgun from a guard.  He never had an AR-15, despite the most fervent wishes of the main street media.  Any shots heard from an AR-15 were from law enforcement.  There is no such thing as an "AR-15 Shotgun."

Alexis had been a Naval reservist, and left the service under a bit of a cloud, having had a number of citations for "misconduct", but was ultimately given an honorable discharge.

He claimed PTSD for having been in the rescue crew at the World Trade Center on 9/11/2001.  While this claim is not verified, he was known to be in New York at the time.  He was in fact, born and raised in New York, and lived in Seattle and Texas later in life.  Reports seem to emphasize the Texas connection because we all know Texans are prone to gun violence.

Until he was fired on Friday, Alexis worked for a subcontractor at the Naval Yard, and had a valid pass to enter.  He did not need to, and did not "steal" a pass to enter. He had a "secret" clearance for this job, and was most recently cleared in June, 2013.

There is considerable evidence that Alexis was suffering some kind of mental illness, likely schizophrenia, including hearing voices, for up to a decade prior to the attacks.  He should have been in treatment, probably institutionalized, and was not.

Oh, and he was a liberal and an Obama supporter.   But then, as noted above, he was crazy, too.
Posted by Fritz at 6:52 PM