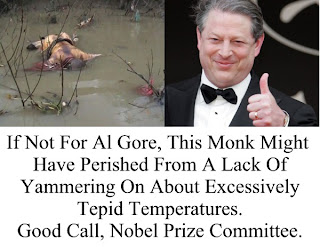 Back in 2007, when Al Gore was being awarded the Nobel Prize as consolation prize for  losing his election to President Bush, for his climate alarmism he confidently predicted that the earth was drastically warming, and that the Arctic Sea Ice would disappear in summer in 2013:

In his Dec. 10, 2007 “Earth has a fever” speech, Gore referred to a prediction by U.S. climate scientist Wieslaw Maslowski that the Arctic’s summer ice could “completely disappear” by 2013 due to global warming caused by carbon emission.

Gore said that on Sept. 21, 2007, "scientists reported with unprecedented alarm that the North Polar icecap is, in their words, 'falling off a cliff.' One study estimated that it could be completely gone during summer in less than 22 years. Another new study to be presented by U.S. Navy researchers later this week warns that it could happen in as little as seven years, seven years from now." 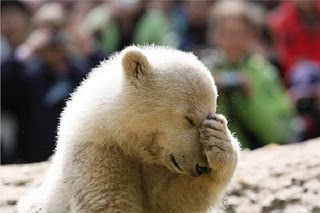 Maslowski told members of the American Geophysical Union in 2007 that the Arctic’s summer ice could completely disappear within the decade. “If anything,” he said, “our projection of 2013 for the removal of ice in summer… is already too conservative.”

The arctic sea ice not only survived the summer minimum of 2013 (the first sign of refreezing being seen in the data, from various sources), it has actually increased by about a million and a half square kilometers over 2012: 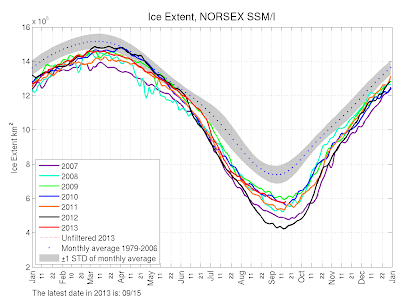 Meanwhile, the globe hasn't warmed significantly in about 12-17 years, depending what set of atmospheric temperature records you choose, and the IPCC has recognized the failure of its models to successfully predict the lack of warming, and has reportedly reduced the value of the central tendency and spread the range of it's prediction for the sensitivity of climate to CO2 and rate of warming in their latest missive, the as yet unreleased IPCC Fifth Assessment Report (AR5).


‘ECS is likely in the range 1.5C to 4.5C… The lower limit of the assessed likely range is thus less than the 2C in the [2007 report], reflecting the evidence from new studies.’ SOURCE

Meanwhile, solar activity, as measured by sunspots, umbral magnetic field, and radio emissions are sinking to lows not seen since the Dalton Minimum, and is expected to stay low until 2100 (beware of predictions, they often bite back).  And a new experimental link between low solar activity, increased cosmic rays, and cloud seeding has provided a causal link for the long standing observations that low solar activity corresponds to cool climate globally.

All in all, it hasn't been a good month or so for climate alarmism.  No wonder the media seems less interested in carrying the story: 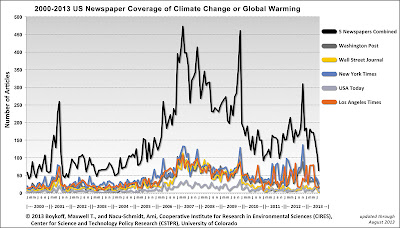