The IRS Must Be Reformed

A great column by the Blogfather:

...new emails have come out that make the IRS scandal look anything but phony. Emails recovered by the House Ways and Means Committee demonstrate that the targeting of Tea Party groups -- and of voter-integrity groups -- was orchestrated from the top of the agency. Rather than being conducted by a few rogue employees in the Cincinnati office of the IRS, the Tea Party targeting was regarded by Lerner as something "very dangerous" politically, and she observed that "Cincy should probably NOT have these cases."

The emails also reveal Lerner's concerns that the Democrats might lose their Senate majority, and her hopes that the Federal Election Commission might "save the day" by interfering with right-leaning grassroots activity. The IRS also shared information with the FEC, something not permitted by statute, raising questions about just how politicized both agencies were.

I don't think that's really in question.  And he goes on to make a point I made back at the beginning of the scandal:


...another reason why we need to get to the bottom of the IRS scandal, which isn't the least bit "phony." It seems to me that there are two possible problems here. One is that this came from the Obama White House. The other is that the -- overwhelmingly Democratic -- career civil service at the IRS didn't need White House instructions to go after Tea Party groups it saw as enemies.

I'm not ready to call for a return to the "spoils system," but the fully politicized federal bureaucracy of our nation's first century or so did have two advantages: First, presidents couldn't hide behind the bureaucracy, as they were presumed responsible for the actions of government bureaus staffed with their supporters; and second, politicians were less inclined to trust the bureaucracy with enormous and discretionary power when they knew that it would sometimes be staffed by their political adversaries. 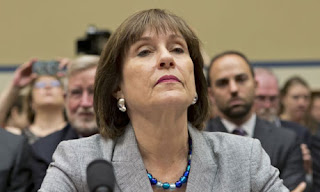 Drag Lois Lerner back in front of the the committee and make her answer; I'm perfectly content with the argument that she waived her 5th amendment right against self incrimination when she declared he innocence.

And the spoils system?  Maybe if we turned over the bureaucracy over every 4-8 years it wouldn't be so imperial about the way it tramples on citizen's rights if they had to spend more time on the outside.

My own proposal is to subject civil servants to "affirmative action" based on political persuasion.
Posted by Fritz at 5:00 AM