From the Other McCain (although he's not the only one covering the story): ‘It Matters How You Say It’: Democrat Wishes Painful Death on Children

Allen Brauer “has a lifetime of experience in political and social movements for change” and “is a longtime activist in the LGBT equality movement,” which is to say, he’s a hate-filled monster: 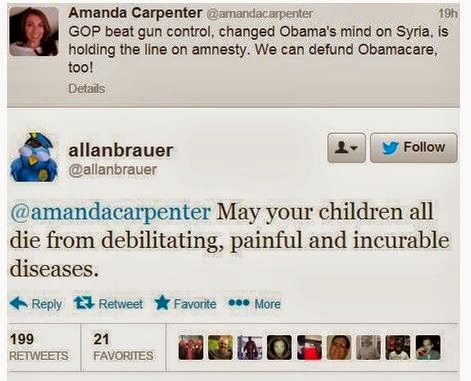 There must be something about Twitter that make people's fingers faster than their brains.  So, predictably, a right-leaning hailstorm of justifiable criticism fell on his head across the internet, and he doubled down on his ass-hattery and pulled out the victim card: 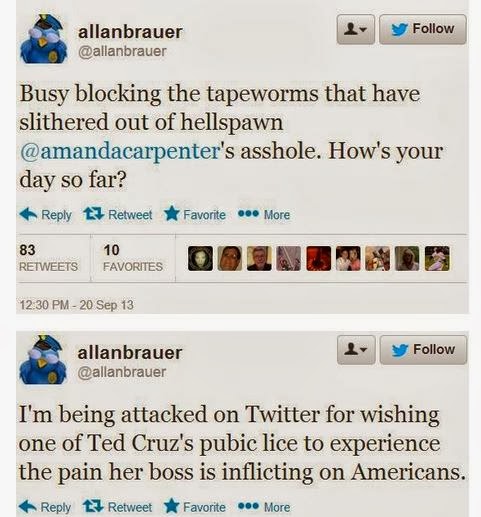 After which, Brauer resigned from his volunteer role as Communications Chair in the Sacramento, California Democratic party.  He is such a fine example of a communicator...


Twitchy has assembled a collection demonstrating Brauer’s long history of hateful comments, including: “twitchy.com is a sort of Buzzfeed for the spastic fascists who live in @michellemalkin‘s diseased cooter” (April 20, 2013).

The only fault the California Democratic Party could find with his statements is that it:


...lets fringe characters—those who are actively trying to shut down the government—like Ted Cruz, off the hook.

Meanwhile, out away from the Left Coast, in the heartland, University of Kansas professor David Guth, was placed on paid vacation administrative leave after tweeting that he hoped the children of NRA members would be shot and killed:


“blood is on the hands of the #NRA. Next time, let it be YOUR sons and daughters.”

People with poor impulse control should avoid the use of Twitter...
Posted by Fritz at 12:52 PM