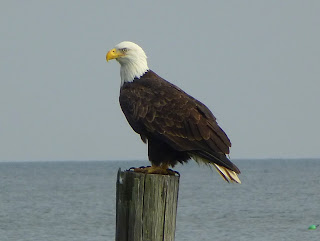 Obviously, based on my recent walks on the beach, the Bald Eagles, at least in my neighborhood are doing great, but it's nice to see a positive story on Chesapeake Bay, since we can't seem to get one for Blue Crabs, American Oysters, or Striped Bass:

"Today more than 10,000 eagle pairs nest each year across the Lower 48, and many more in Alaska. And nowhere is their comeback more dramatic than along the James River, where they once again dominate the avian scene," writes Elizabeth Shogren.

"Forty years ago, we probably would not have seen a single bald eagle here," says Bryan Watts, a conservation biologist at the College of William and Mary in Williamsburg, Va. "A prime contributor to their disappearance in this region was located just upriver, where Bailey Creek meets the James. In the 1960s and 1970s, Allied Chemical Corporation produced a pesticide called Kepone (chlordecone) at its plant in Hopewell, Va."... 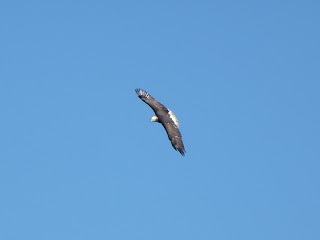 The rebound in Bald Eagles here since I moved into Maryland in 1985 has been remarkable.  At this point the local eagles are doing so well that many of their young have no choice but to leave the region to find a nesting territory.


The conservation effort has not been easy and is still a challenge in some areas, such as the Channel Islands off the California coast. Bald eagles once called these islands home but disappeared with the emergence of the pesticide DDT. In addition, humans changed the ecosystem there by introducing invasive species. Restoration efforts have included removing the alien species and helping native species, such as the endangered Channel Island fox, recover. A program for reintroducing bald eagles that started in 2002 has been a success, with 2010 seeing a record-setting 15 wild chicks hatched. But the reintroduction of bald eagles to their historic habitat on the islands presents a new concern: bald eagles may see endangered foxes as a prey source, should their preferred marine prey of fish decline. Right now, it is simply a tenuous wait-and-see game for the foxes as eagle numbers rise.

How the heck can an eagle get a fox without having an Osprey to do the heavy lifting?

That's some fancy flying.
Posted by Fritz at 5:32 PM