Election 2020: The Mess in Maricopa

That vote audit in Maricopa County, Arizona proceeds, over the objection of the Merrick Garland DOJ, and some state Democrats. WaPoo whines that Arizona Republicans push back against Justice Department concerns, setting up possible clash over Maricopa County recount. AZ Central, Department of Justice asks Arizona Senate to respond to concerns about election audit. Slate is skeptical about how Arizona’s Republican-Run Election Audit Is Now Looking for Bamboo-Laced “China Ballots”. An interesting idea, we'll see if anything comes of it. I would think the Chinese would be smarter. Via the Wombat's In The Mailbox: 05.06.21, The Geller Report reports  Maricopa County Can’t Get Passwords To Voting Machines For Election Audit – Only Dominion Has Them. Hmm. Finally, from CTH Sundance has another Important Maricopa Ballot Update – GOP Chairwoman Kelli Ward Discusses Sec. Of State and DOJ Coordinating to Derail Audit

Also from the Wombat's In The Mailbox: 05.06.21 the American Thinker thinks, Needed – A National Election Fraud Database, and The Geller Report reports Michigan Voting Machines Had Unauthorized Implant To Circumvent Security. Another asterisk for President* Biden? Also from Sundance, President Trump Congratulates Windham, New Hampshire, For Their Fortitude in Organizing 2020 Ballot Audit. A reminder:

A hand recount about three weeks after election night determined that the four Windham Republicans running for House seats each received about 300 more votes than were reported from automatic AccuVote counting machines. Gov. Chris Sununu last month signed the legislation that mandates the forensic audit.

Someone call the wahmbulance. The Mayor of Houston and the Harris County Judge are having a hissy fit. A large group of business leaders is refusing to get involved in the political fight over election law reforms despite pressure coming from both of the elected officials, both Democrats. What do they do? They cancel their participation in some annual events with the group.

Breitbart, Pelosi: Our Chances of Holding the House ‘Would Be Better’ If We Pass H.R. 1. Hmm, why would removing barriers to cheating help you win, I wonder. Also from the Wombat's In The Mailbox: 05.06.21, The Federalist: Critical Race Theory Illuminates Democrat Master Plan To End Honest Elections In America 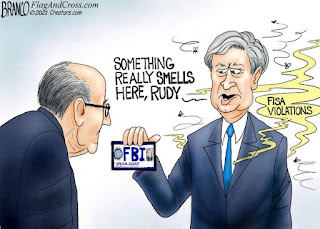 ET, FBI Raid Appears to Be ‘Political Retaliation’ Against Giuliani, Trump, but I didn't need ET to tell me that. It stunk from the beginning. At WaPoo, George Conway has an Opinion: What Trump has to fear from Rudy Giuliani. But when has George Conway ever been right?

The 38 page document, below, reveals how poor a job the FBI did in identifying a woman they say was in Speaker Pelosi’s office on the afternoon of January 6th, 2021.

In summary, the warrant appears to rely on Marilyn Hueper wearing a black coat and having brunette hair as the motivations to raid the Homer Inn and Spa in search of an HP ProBook 640 G5 i5 laptop amongst other items.

The warrant also reveals the Hueper’s identities may have been mistakenly reported to the FBI following an altercation on an Alaska Airlines flight, where the pair are said to have failed to adhere to the airlines’ masking policies.

WaPoo finds an Officer who fought Capitol rioters angered by those who downplay attack. Quick, now do the BLM/Antifa riots all summer. From the Wombat's In The Mailbox: 05.06.21, Don Surber, Abolish the FBI movement begins

D'Souza wrote, "Today’s FBI has quite obviously been corrupted from the top. This is a process that seems to have begun under President Barack Obama, endured during the President Donald Trump years, and has now reached its unfortunate nadir under President Joe Biden. It’s time for conservatives and Republicans to start thinking about getting rid of the FBI."

Instead of dwelling on the Russian Collusion hoax, the lying to FISA judges, and the ignoring of the evidence of felonies on Hunter Biden's laptop, D'Souza went to a more recent example of the politicking by the FBI.

He wrote, "The FBI has unrelentingly hunted down Jan. 6 protesters, in many cases confronting Trump supporters who were merely in Washington at the time, or at the mall rally but not involved in entering the Capitol.

"Those who have been arrested have been treated like domestic terrorists, captured in raids involving drawn weapons, even though the charges against most of them amount to little more than trespassing or entering a government facility without proper permission.

"Nonviolent offenders have been given the same brutal treatment as violent ones. And to this day, the FBI promulgates images—a grandma here, a teenager there—asking the public to help them track down still-at-large individuals who had something, anything, to do with the events of Jan. 6.

"Contrast this concentrated effort with the lackadaisical, even disinterested, approach of the FBI to the Antifa and Black Lives Matter activists. Over a period of many months, those activists have proven far more violent. They have killed a number of people, in contrast to the Trump activists who killed nobody. (The only person killed on Jan. 6 was Ashli Babbitt, a Trump supporter shot in the neck by a Capitol police officer.)"

The FBI's persecution of Rudy Giuliani -- the man who brought down the Mafia's Five Families in New York -- got D'Souza going.

WaPoo whines that Facebook tried to outsource its decision about Trump. The Oversight Board said not so fast. "The panel of experts sent the fate of Trump’s account back to the company to decide" Why should they take responsibility when it clearly falls on Mark Zuckerberg. David Marcus at NYPo reminds us that Facebook’s ‘independent’ board stocked with Trump haters. I rarely agree with Fauxcahontas, but I do here; Mediaite, Elizabeth Warren Argues That Facebook Should Not Have the Power to Ban Trump: ‘Acting Like They’re Bigger Than the Government’. NYT, cited at Hot Hair, "It's his own damn fault". From the Wombat's In The Mailbox: 05.06.21, Weasel Zippers, White House Defends Facebook Censorship – “More Needs To Be Done” Fox reports Facebook under fire for encouraging border crisis with ads for human smugglers, cartels: Rep. Kat Cammack. Hey, coyote's money spends just like every one else's, and they're aligned politically. And That Was Quick: Twitter Bans Trump's New Account (Matt Margolis at PJ Media). They don't even pretend it's about anything other than political power any more.

In the ongoing movement to remove Liz Cheney from RNC leadership, and possibly replace her with Elise Stefanik, all I have is a bunch of links:

Byron York's Daily Memo: Why House Republicans have had it with Liz Cheney | Washington Examiner
The real reason Republicans want to oust Liz Cheney – HotAir
Majority Leader Steny Hoyer: Liz Cheney Is 'Principled,' 'Believes in Truth'
Poll: Half Of GOP Wyoming Voters Will Vote Against Liz Cheney In 2022
Why won't Liz Cheney's replacement move on from talking about the election?
– HotAir
Liz Cheney Is Reportedly Looking for the Exit and It Cannot Come Soon Enough by Matt Vespa
Cheney faces the boot in Washington. Wyoming isn’t looking much better. - POLITICO
Some GOPers say Stefanik not right fit, but seen to replace Cheney
To succeed Cheney, Stefanik embraces false claims about election - The Washington Post
Could We Maybe Replace Cheney With A Real Conservative? » Pirate's Cove
Linked at Pirate's Cove in the weekly Sorta Blogless Sunday Pinup and links.
Posted by Fritz at 11:12 AM