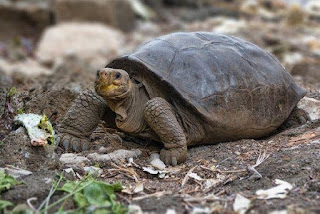 Except when it isn't, UPI, Scientists confirm discovery of giant tortoise believed extinct since 1906


A giant tortoise believed to have gone extinct more than 100 years ago has been found in the Galapagos Islands, and researchers are now preparing an expedition to see if more can be found.

Scientists from the California Academy of Sciences said the lone female turtle, identified with the chelonoidis phantasticus species, was found in 2019 on Fernandina Island during a joint expedition of the Galapagos National Park and the Galapagos Conservancy.

Yale University researcher Gisella Caccone and a team of geneticists performed an analysis on the tortoise and compared it with the last known specimen taken in 1906 for confirmation, according to the Galapagos National Park Facebook page.

"Rediscovery of this lost species may have happened just in time to save it," tortoise expert James Gibbs, vice president of science and conservation with the Galapagos Conservancy, said in a statement. "Now we urgently need to complete the search to find other turtles."

It would be nice if the could find a male on the island (as far as I know, the Galapagos Tortoise species are mostly endemic to a particular island (I think Darwin wrote a book about that). But if not, a hybrid, preserving half the genes could be an alternative. And I know just the turtles to do it:  COWABUNGA! THIS CENTURY-OLD TURTLE’S NO MUTANT, BUT MIGHT AS WELL BE AFTER SIRING 800 BABIES

A 100-year-old giant tortoise named Diego and from the Galapagos' Española Island is retiring from controlled baby-making after he helped saved his entire species from extinction by fathering 800 children, reports The New York Times. Nearly eight decades after he was taken from his native habitat, Diego will finally return home to Española Island in March.

While Diego was one of several turtles participating in a breeding program at the Fausto Llerena Tortoise Center on the island of Santa Cruz, he "displayed an exceptional sex drive," according to the article. He joined the program in 1976 after living at the San Diego Zoo for 30 years. With his coital help, the Tortoise Center amazingly increased its shelled population from 15 to 2,000. Forty percent of those offspring were sired by — you guessed it — Diego himself. If you can believe it, though, he wasn't even the most feisty member of the bunch.

“Another more reserved, less charismatic male" produced 60% of the kids, according to James P. Gibbs, a professor of environmental and forest biology at the State University of New York in Syracuse, per the Times. A third male had virtually no progeny.

“It clearly is the other quieter male that has had much more success,” said Gibbs, according to the article. “Maybe he prefers to mate more at night."