Annals of the Biden Crime Family - Bitch Set Him Up!

Starting with the icing on the cake, from Tristan Justice at Da Fed, Hunter Biden Bragged About Smoking Crack With Former D.C. Mayor Marion Barry. It's an elite group at the top.

More importantly, though, from Miranda Devine at NYPo,  his laptop shows Hunter Biden brought VP Joe to dinner with shady business partners. NYPo, Joe Biden was a ‘regular’ at DC hotspot where he met Hunter’s Kazakh associates. And from Tyler O'Neil at PJ Media, Laptop BOMBSHELL: Hunter Biden Introduced His Dad to Business Cronies in 2015

Hunter Biden invited guests to the dinner on April 16, 2015, held in the private “Garden Room” at Café Milano, a Georgetown restaurant whose catchphrase is, “Where the world’s most powerful people go.” The New York Post first reported on the emails on Wednesday.

The next day, Vadym Pozharskyi, an executive at Burisma, emailed Hunter Biden to thank him for introducing his father.

“Dear Hunter, thank you for inviting me to DC and giving an opportunity to meet your fatherand spent [sic] some time together,” Pozharskyi wrote on April 17, 2015. “It’s realty [sic] an honor and pleasure.” 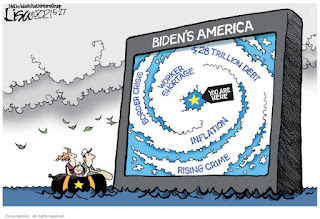 Hunter Biden's laptop -- CENSORED and BLACKLISTED by social media with the legacy media's urging. Kept topic from being discussed during a presidential election. But the laptop is REAL.

Discussions of covid's origins -- CENSORED and BLACKLISTED by social media with the legacy media's urging. Kept topic from being discussed during a presidential election. But the lab leak theory is the most viable theory, and almost certainly the true one.

The Russiagate Hoax and "Pee Pee" Dossier - not only permitted by social media, but literally a topic on every single leftwing news channel at least three times a week -- and every single day on CNN. Kept topic being constantly discussed for not just an election seasons, but for two election seasons. But the Russiagate Hoax was FAKE, created by Hillary Clinton for purposes of interfereing with an election.

Henry Rodgers at Da Caller, Tom Cotton Presses Biden’s ATF Nominee Over Prosecuting Hunter For Lying On Background Check To Purchase Firearm "Chipman responded by saying: “I will ensure that all violations of law are investigated and referred.”" First, Biden ATF Nominee Promises To Give Hunter Biden Gun Background Check Form To Senate, Probe Any Crimes, but a day later, ATF Will Not Release Information About Hunter Biden’s Guns Because Of ‘Substantial Privacy Interests’ (Both at Da Wire). Quick, now do the Proud Boys or the Oath Keepers.

Also from Wa Free Bee, Labor Board Swats Down Biden Appointee. J. Christian Adams at PJ Media,  You Knew DOJ's Kristen Clarke Was a Radical, But It's Much, Much Worse Than They're Letting On. Chris Bedford at Da Fed, Biden Purges Non-Partisan US Commission On Fine Arts In Unprecedented Move Against Popular Classical Architecture. There's nothing too trivial to ignore in their march to destroy the culture.

Breitbart, Biden Spends as Much on Health Care for Illegal Aliens as Trump Did on the Wall

Sundance at CTH, Biden Administration Will Import Metals and Close U.S. Mines To Appease Environmental Wing of Party. Insty, YOU F*CKED UP, YOU TRUSTED US: