Located near the intersection of Route 4 and Bowie Shop Road in Huntingtown, it depicts President Joe Biden and Vice President Kamala Harris in cartoon feces. The sign then says, "DON’T BLAME TRUMP! YOU ARE STUCK WITH THESE TWO (expletive) HEADS!!!"

"It’s just vulgar," said Jeanette Flaim, who is the chair of the Calvert County Democratic Central Committee. "Kids are going to school, and they’re going by it every day, and parents are driving their kids. We just don’t think kids should have to see that or parents should have to explain that." 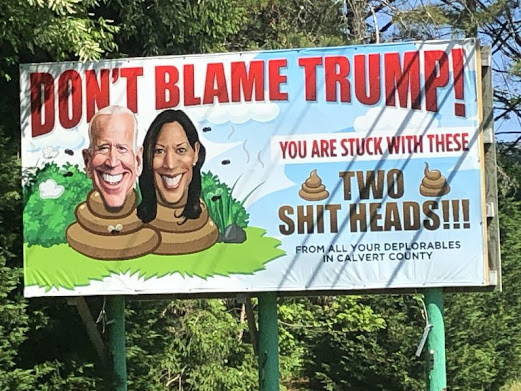 I haven't been that far up county since I got the second shot of the Trump vaccine. I might need to make a trip.

A little about Calvert County for those not familiar. We're location on the Western Shore of Chesapeake Bay, anywhere from 20-50 miles SE of Washington DC. Many people who live here commute to DC and have the typical deep blue DC politics. At the same time, we are the site of a large nuclear power plant, and a natural gas export facility, industries Democrats would desperately like to kill. We are also just across the river from Patuxent River Naval Air station, and many county residents work there. The county has voted R in every presidential election since Carter; in the last election 52 - 46%.