Regarding the Capitol Incursion, Cutie Pavlich at Town Hall watches as AOC Gets Wrecked for Making a Ridiculous Claim About 'Serving in War' and at Twitchy, ‘Dude, are you HIGH’?! HuffPo correspondent throwing a FIT because 9/11 actually was FAR WORSE than Jan. 6 BACKFIRES in a huge way.

And as I expected, once Pierre Delecto came for the Jan. 6 'Truth" Commission,  (Bonchie at Red State, Mitt Romney Decides to Cosplay as Liz Cheney) Lez Murkowski decided the coast was clear, on Da Hill, Murkowski to back Jan. 6 commission bill and at Breitbart, Lisa Murkowski Is a ‘Yes’ Vote on January 6 Commission, Democrats Need 7 More Republicans. However, this may be moot as Democrat Joe Manchin Opposes Nuking Filibuster over GOP January 6 Commission Opposition

As of Tuesday, Sens. Lisa Murkowski (R-AK), Susan Collins (R-ME), Mitt Romney (R-UT), and Bill Cassidy (R-LA) are the four Republicans who have suggested sympathy for creating a commission to distract from the failed polices of the Biden administration.

I&I,  Welcome To Joe Biden’s Police State as Julie Kelly at Am Great discusses the condition the Jan. 6 hostages are being held under, Man in Pelosi’s Office Discusses Jail Conditions for January 6 Detainees "Unfortunately for dozens of political prisoners held hostage by their own government, freedom appears to be a long way off." Sounds like something out of a communist dictatorship:

Joe Biden’s Justice Department, nonetheless, is seeking pretrial detention orders for many Capitol Hill protestors; in some cases, prosecutors argue the defendants pose a threat to society because they doubt the outcome of the 2020 presidential election.

Upon arrival at the D.C. jail, January 6 defendants are ordered to quarantine for two weeks to follow COVID-19 rules. Detainees are not allowed to leave the quarantine cell for any reason.

Once the quarantine period is over, detainees are moved to another permanent unit, which is not unlike the quarantine quarters. “First off, all the cells are contaminated with black mold, even the sink we are supposed to drink out of,” Barnett said. “The guards gave us some kind of cleaner but it didn’t really work.” The cells are roughly 70 square feet with a concrete slab for a bed, a toilet, and a sink.

Detainees are held in solitary confinement conditions for 23 hours a day. Breakfast, Barnett said, arrives at 3:30 in the morning and is inedible “slop.” Dinner usually consists of bologna.

During their one hour of free time each day, detainees must attend to all personal business including hygiene such as a shower. The men don’t have access to shaving gear or haircuts. “The barbershop is closed. The best we could do was use a toenail clipper they gave us.”
. . .
The guards, Barnett said, go out of their way to make life harder for the detainees. “It is purposeful and deliberate collusion, to make every facet of your existence miserable,” Barnett said. This includes instances of physical abuse; guards slammed Barnett’s face into the concrete floor at one point. After confronting the guards for not following prison rules—Barnett read the Department of Corrections inmate handbook when he arrived—and accusing one guard of sexual harassment, Barnett was placed in the D.C. prison’s general population as punishment.

Another detainee, Barnett recounted, was attacked in his cell in the middle of the night, handcuffed and beaten “senseless,” Barnett said. He suffered extensive injuries. “They damn near killed him.” Another young man with evident emotional issues was heavily maced by guards one night when he had some type of breakdown. “I shouted at them to leave him alone.”

Religious services are not allowed so Barnett and a few others organized a Sunday morning service. The guards, Barnett said, were “nasty and insulting” about their attempts to practice their religion. “We couldn’t even talk about God.” There is “no doubt” in Barnett’s mind that the January 6 detainees are treated differently because of their political views.

The prison’s library, the guards told the detainees, is closed. Access to law books and other reading material is nonexistent, Barnett said. The detainees started their own newsletter with paper and pencils purchased through the commissary. They also sing the National Anthem at 7:00 each night to lift morale. “These guys are patriots.”

Attorney-client privilege also is nonexistent, Barnett and his lawyers, Joseph McBride and Steven Metcalf, told me. There is no privacy during discussions and video calls can take up to two weeks to schedule.

All of which is not surprising when you consider the attitude of the people in charge; from Andrew Kerr at Da Caller, Trump Supporters Unequivocally Support Extremism, According To Pentagon Official Overseeing Efforts To Root Out Extremism  Do you now, or have you ever, supported Donald Trump?

“Support for him, a racist, is support for ALL his beliefs,” Bishop Garrison, who was appointed by Secretary of Defense Lloyd Austin to lead the Countering Extremism Working Group (CEWG), tweeted in July 2019 in reference to Trump.

“He’s dragging a lot of bad actors (misogynist, extremists, other racists) out into the light, normalizing their actions,” Garrison, an Army veteran, tweeted. “If you support the President, you support that.”

HE, JOE SCARBOROUGH, MARICOPA COUNTY, AND THE HUBRIS OF CANCEL CULTURE. "The MSNBC host wants citizens who support a legal audit of election ballots to "love" America or "leave it." They're sure afraid of something. I wonder what? From Sundance at CTH, Arizona Senate Liaison Ken Bennett Provides an Update on Maricopa Ballot Audit

The ballot audit for Maricopa County, Arizona, started back up yesterday. In this interview Senate liaison Ken Bennett provides an update and discusses the ridiculous Board of Supervisors claim of voting machine compromise.

Keep in mind the Maricopa Board of Supervisors would not allow the auditors to use the tabulation center for the audit. That decision forced the State Senate to seek another venue for the audit. Now the Board of Supervisors is using the need to move the machines as a reason to question chain-of-custody for the machines they forced to be moved. Yeah, you cannot make this stuff up. 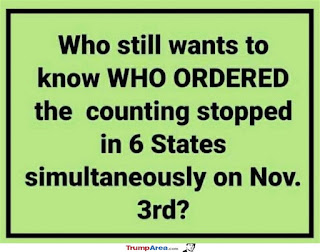 Also from sundance,  Action Alert, Windham New Hampshire Ballot Issues Identified in Adjacent Counties – Exact Same Ballot Issues, State Audit Needed. Having identified that the New Hampshire machines generated massive errors when used with folded ballots, it may be necessary to go back through them all. In New Hampshire, as I hear it, ballots with "overvotes" caused by the folding problem were thrown out as invalid for all races. Next question, is this also true of other machines using similar software in other states? I understand most of the voting machines descend from a similar line.

Via the Wombat's In The Mailbox: 05.25.21, Geller, Trump Reacts As New Hampshire Audit Discovers Only 28% of GOP Test Ballots Were Counted By Voting Machines

“Why aren’t Minority Leader Mitch McConnell and Republicans doing anything about what went on in the 2020 Election?” he questioned. “How can the Democrats be allowed to get away with this? It will go down as the Crime of the Century!”

“Other States like Arizona, Georgia (where a Judge just granted a motion to unseal and inspect ballots from the 2020 Election), Michigan, Pennsylvania, and more to follow,” Trump concluded.

The Wombat also hosts  Don Surber, who reminds us of  When Jake Tapper Said An Election Was Stolen. Basically, whenever a Republican wins a national election. Also at Am Great Five Months After january 6 Riot, National Guard Finally Leaving DC