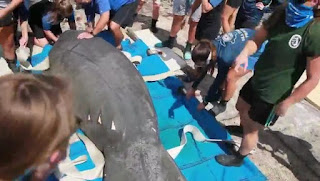 Palm Beach Post: Tale of Chessie the traveling manatee nearly ends in death, but there's more to his story

The manatee arrived in the triage unit at SeaWorld Orlando like so many this year, emaciated, its skin clinging too tightly to its skull, ribs showing.

It had a brand telling of a previous rescue and release, but no tracking chip.

Still, the scars on the 1,100-pound male — like fingerprints — quickly identified his celebrity.

Chessie the manatee, whose nickname stuck after a 1994 rescue from the Chesapeake Bay, is a star of children’s books for his journeys as far north as Rhode Island. He is notorious for ditching tracking devices, made headlines in 2001 and 2011 when he reappeared in Mid-Atlantic waters, and flew on a C-130 Hercules on an escorted trip back to Florida.

Chessie the manatee made his name in Baltimore waters in the 1990s. 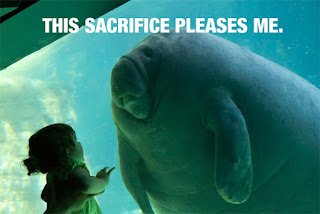 I wonder what a fair bill would have been for the return trip on a C-130 would be.

Chessie went to SeaWorld after a Feb. 5 rescue in Riviera Beach by Florida Fish and Wildlife Conservation Commission officers who saw him floating on his side — an obvious sign of distress.

On Tuesday, a nearly 1,500-pound Chessie was released at Anchorage Park in North Palm Beach.

He is wizened — possibly upwards of 40 years old — but still the same scamp who evaded rescuers for eight days in October 1994 after being spotted in a sewage outfall near Queenstown, Md., in the Chesapeake Bay.

I missed Chessie when he visited our harbor in 2011.

Best of luck, Chessie. I suggest moving no farther north than the Carolinas in the future.