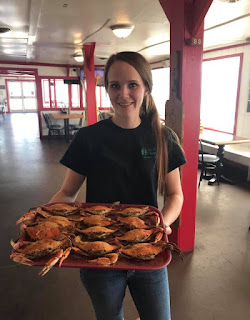 “We’re paying $200 per bushel to the watermen,” he said. “$210 for Miles River crabs. They’re typically a little larger crab. Always been that way. We’ve never paid any higher than this for crabs. The cool weather’s holding them back.”

Buddy Roe works on the docks and wharf at the PT Hambleton operation in Bozman, at the head of Grace Creek, west and south of St. Michaels. I ran into him a week or so ago when a waterman brought in two bushels for a day’s work. He told me about the high price.

“Is that for number ones?” I asked.

“They haven’t shed yet this year,” said Buddy. “Right now they’re all number ones.”

That means all the crabs in the baskets are the minimum legal size of five inches or better.

“The crab season will turn out alright,” he said. “Once they shed and the crabs get a little bigger. I’ve seen slow starts and I’ve seen faster starts. It’ll change.” 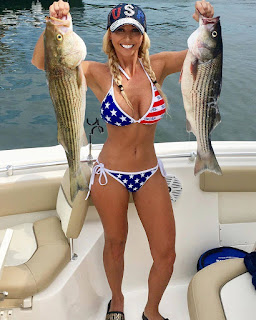 And Mike Spinney at the Bay Journal wants a moratorium on Striped Bass,  The gradual and sudden decline of striped bass

. . . Now, the ASMFC is creating a new plan to manage striped bass. Known as Amendment 7 to the Interstate Fishery Management Plan for Atlantic Striped Bass, the commission has asked for public input as it considers its options.

The primary objective of Amendment 7 is “To perpetuate, through cooperative interstate fishery management, migratory stocks of striped bass; to allow commercial and recreational [harvests] consistent with the long-term maintenance of a broad age structure, a self-sustaining spawning stock; and also to provide for the restoration and maintenance of their essential habitat.”

If the commission is serious about achieving this goal, it knows how to do it: Implement a new moratorium on the harvest of striped bass. A harvest moratorium is the only approach that has thus far been proven to achieve these goals for rockfish. That is why the organization Stripers Forever is calling for the ASMFC to take bold action and impose a 10-year moratorium on the harvest of striped bass.

Stripers have demonstrated they can replenish their numbers when given the opportunity. If the commission adopts a 10-year harvest moratorium as we suggest, striped bass will return to healthy abundance and with the balanced age structure necessary for sustaining the fishery in the long term.

Furthermore, the ASMFC can use those 10 years to adopt better, more scientific means for collecting the data it needs to sustain the fishery after the moratorium is lifted.

A harvest moratorium would still allow recreational anglers to fish for striped bass, but on a catch-and-release basis only. That means the recreational striped bass angling economy — which far exceeds the commercial fishery — would remain largely intact. Remember the Southwick study that found the entire striped bass fishery worth $6.8 billion? The recreational fishery accounted for $6.2 billion of that total.

Ten years seems a little steep to me. Five years worked last time, from a lower point in their population. Although, that depends on spawning and recruitment success, which isn't really controllable.

But the good news /sarc is that the invasive Northern Snakehead is doing quite well, thank you very much, Snakehead fish still a problem in Maryland waters (WBAL-TV)

Scientists call the northern snakehead fish an apex predator that for years has plagued Maryland waters. Most recently, anglers say populations of the fish have ramped up, with the potential to devastate the Chesapeake Bay ecosystem.

In shallow rivers interlacing parts of Blackwater Wildlife Refuge in Dorchester County, anglers like Caz Kenney gather by the number in a fight against an elusive fish called the snakehead.

"As somebody who has fished this refuge and the complex for 30 years of my life, you know, I've watched a lot of changes take place since the snakeheads have shown up," Kenney said. "We are in trouble here in the Blackwater National Wildlife Refuge and everything that's feeding it."

That trouble began in Maryland in the early 2000s when the snakehead, a fish native to Asia, was first discovered in Crofton. Since then, it has been spreading rapidly throughout parts of Maryland and other states, eating nearly anything.

"It has been steady, but rapid," said angler Eddie Bramble.

"You look at crayfish, you look at frogs, you look at ditches. I mean, ditches used to be filled with crayfish here in Dorchester County. There's no crayfish in the ditches anymore. There's no mudbug holes as you walk the ditches. They're not here, they've been ate, and the only thing really capable of doing that damage is the snakehead. What people don't realize is that this fish only needs (a small amount of) water to thrive and feed and reproduce," Kenney said.

"Last year, I didn't take anybody out that didn't catch one or two," said charter boat captain Gary Smith. 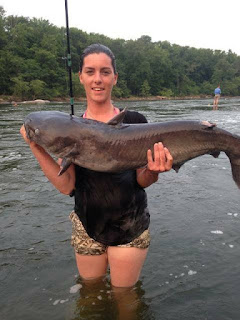 And the Blue Cats are just eating every thing in sight too, Virginia Sea Grant, New research gives the dish on blue catfish eating habits

A new study is the first to estimate food consumption rates for blue catfish in four tidal tributaries of the Chesapeake Bay: The James River, the Mattaponi River, the Pamunkey River, and the Rappahannock River. On average, a blue catfish eats roughly 2-5 percent of its body weight in food in a day during peak feeding season, according to the research published in Transactions of the American Fisheries Society.

“This is the first time we’ve looked at how much blue catfish are eating both in the field and the lab using natural food sources, and for larger fish,” said Joe Schmitt, who led the study of more than 1,200 catfish as part of his Virginia Tech Ph.D. research and Virginia Sea Grant graduate research fellowship.

The researchers also measured how much a blue catfish would eat if they had unlimited food available to them — in this case, blue crab or gizzard shad — and found that the catfish could eat anywhere from 8-9 percent of their body weight in a day. Medium-sized blue catfish consumed more food than the largest blue catfish in the laboratory tanks, although it was unclear whether this eating pattern also holds true out in Virginia’s tidal rivers.

“I think that’s still an open question,” said Donald Orth, a professor in the Virginia Tech Department of Fish and Wildlife Conservation. “Do the fish become more sluggish and feed less when they are adults than they do as smaller fish? We like to think, ‘They’re younger, and they’re just going to be hungrier like a teenager,’ but that’s still hard to demonstrate with the sample size we had.”

Everything is just going swimmingly.