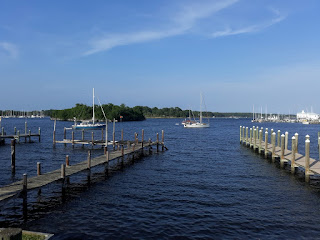 We connected with a couple that we've known since we lived in Florida back in 1983, and haven't seen since March last year, and had dinner at a restaurant on the harbor at Solomons Island.

We managed to observe several unusual aircraft from Patuxent River Naval Air Station across the river. 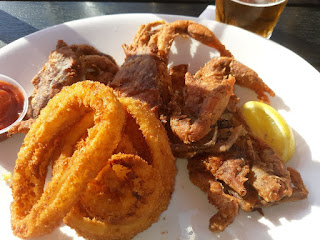 I had the simple soft-shell crab dinner, three crabs, with a couple of sides. They were good, but I think I would rather have had them in a sandwich, not that I need the bread. Oh, and a couple of Lagunita IPAs to make up for the lack of bread. Georgia had fish chips, with non-Chesapeake Bay haddock. 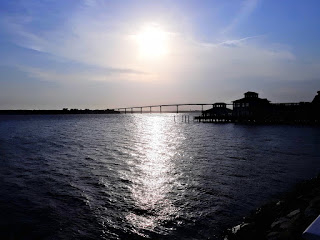 Both Georgia and I opted for Key Lime Pie for dessert, while our friends split a big slice of Smith Island Cake, in non-traditional lemon flavor.
The sun getting ready to set over the Governor Thomas Johnson Bridge, which connects Solomons with California MD on the St. Mary's side.
Posted by Fritz at 8:01 PM