This is why the DOJ absolutely refuses to release thousands of hours of surveillance video -- they claim because it's "too sensitive" and would compromise "national security."

The actual truth is because the video shows Capitol Police allowing protesters to enter the Capitol, and you can't make a trespassing charge stick when the agents of the state are giving permission to enter.

Now, that doesn't excuse the relatively few -- like 15-20 people -- who were attacking cops. No cop gave permission to be attacked, and anyway, you can't assent to assault.

But this does mean the 400 people being held without trial, in solitary confinement, for political "crimes," including mere trespassing, cannot be convicted of that crime and should be released at once.

WaPoo whines Republicans’ conflicting message: Embracing Trump election lie is key to prominence, just stop asking us about it Twitchy has a great thread, and I just can't post it all, ‘Convenient!’ Mollie Hemingway thread breaks down Dem & media ‘big lie’ projection (with an assist from Byron York) 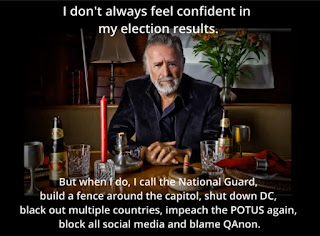 And onto Maricopa where ET reports GOP Chair Elise Stefanik: Justice Department Is ‘Trying to Block’ Maricopa County Audit. I wonder why?  Insty NOTHING TO HIDE: GOP Chair Elise Stefanik: Justice Department Is ‘Trying to Block’ Maricopa County Audit. “Transparency is good for the American people. And again, this should be a nonpartisan issue, whether you are Republican, Democrat, independent, or conservative, transparency is important, and the audit was passed by the Arizona state Senate.”
Internewscast, BREAKING: ‘Significant Discrepancies’ Discovered In Arizona Audit, Ballots Off Up to 17.5%, ‘Likely Joe Biden Did Not Win’. AP, Arizona Republicans fight back against election fraud claims. The people in charge of the work don't want the scrutiny. Funny how that works. Sundance at CTH reports a Propaganda War, Maricopa Board of Supervisors Leaks Senate Letter to Media Before Sending to Arizona Senate and posts Arizona GOP Chairwoman Kelli War Explains the Current Political Propaganda War Taking Place in Maricopa County
Also, Windham, New Hampshire, Ballot Audit Forensics Finds CCTV Cameras of Ballot Counting Machines in Audit Room Mysteriously Disabled for 90 Minutes. I find my self resorting to the old Goldfinger quote "Once is happenstance, twice is coincidence, three times is enemy action." There have certainly been multiple occasions where it seems prying eyes were unwanted.
Capt. Ed at Hot Hair catches the WaPoo with its hair on fire, WaPo: Let's face it, Dems' voting-overhaul bills are all but dead and Ace notes Under Proposed New Illinois Congressional Map, Adam Kinzinger Will Be Gerrymandered Out of His Seat


Kinzinger's quest to save himself from the Democrats by essentially becoming a Democrat has failed.

By the way, you know what's weird? This is obviously a highly partisan gerrymander, as it is designed to take not one but two Republican districts away.

Oh nevermind, the question answers itself.

Ace also stirs himself to acknowledge the Purge: Space Force Commander Fired for Noting, Correctly, That Critical Race Theory Is Marxist and In a Sneaky Unpublicized Appendix, The FBI Finally Admits That the Leftwing Extremist James Hodgkinson III Committed a Politically-Motivated Terrorist Attack When He Attempted to Assassinate a Dozen Republican Congressmen

Literally it took four fucking years for them to stop playing word games about this.

Rudy Giuliani and his legal team are looking to dispute the "constitutionality and legality" of the government's "conduct" in its investigation into the former New York City mayor and personal attorney of former President Donald Trump before the court appoints a special master in the case.

In a letter unsealed Monday, sent last week to U.S. District Judge for the Southern District of New York Paul Oetken, Giuliani and his legal team said the conduct of federal investigators must first be reviewed and "resolved" before the appointment of a special master.

"The validity of the 2019 covert warrant, and the handling of the information obtained by the prosecutor are serious questions that must be resolved before any further damage is done," they wrote.

Federal investigators seized electronic devices from Giuliani's New York City apartment last month after executing a search warrant as part of a federal probe into whether he violated the law by lobbying the Trump administration on behalf of Ukrainian officials in 2019.

But Da Beast holds out hope, Trump Has Blown Off Rudy Giuliani’s Pleas for Help as Feds Circle

And it looks like Liz Cheney's week in the sun is fading, only one as Politico roots for her to do more damage to the Republicans with Cheney, unbound, settles into the 'bull's-eye of controversy'