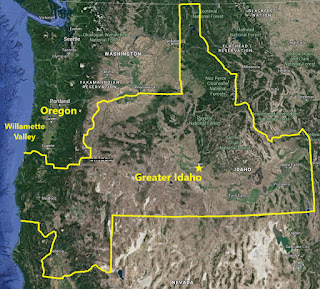 Grant voted 1,471 to 895 for county officials “to meet and discuss relocating Idaho border.”

Lake voted 1,341 to 463 for the “relocation of Idaho border” to be taken up in “county board of commissioners meetings.”

Malheur voted 3,050 to 2,572 for “county court meetings regarding relocation of Oregon-Idaho border.”

Sherman voted 429 to 260 in favor of “promoting moving Oregon-Idaho border.”

Baker voted 3,064 to 2,307 for county commissioners “to meet three times per year to discuss a proposal to include 18 counties, including Baker, as part of Idaho,” the Baker City Herald reported. Baker County results are not yet available from the Oregon Secretary of State’s Office.

The grassroots group Move Oregon’s Border for a Greater Idaho wants to flip Oregon’s mostly rural eastern and southern counties -- plus a few northern counties in California -- into Idaho, believing they’d be better off in Idaho’s more conservative political environment. It’s hoping that political pressure from county initiative votes will lead to negotiations between Oregon and Idaho to move the border between the two states, putting up to 22 of Oregon’s 36 counties in Idaho.

“This election proves that rural Oregon wants out of Oregon,” lead petitioner Mike McCarter said in a statement. “If Oregon really believes in liberal values such as self-determination, the Legislature won’t hold our counties captive against our will. If we’re allowed to vote for which government officials we want, we should be allowed to vote for which government we want as well.”

When we lived in Oregon, we lived in Corvallis, a college town comfortably in the Willamette Valley, which would not be expected to split with the remainder of Oregon, but Dad had a "vacation" place in very rural Douglas County, which I would rather expect to join, or even lead such a movement.

As long as I can remember there have been smoldering movements for secession by the rural areas of Oregon, Northern California. I recall talking to a proponent of Jeffersonia or Jefferson in a cafe' near Mount Shasta. Some have even proposed Oregon, Washington and British Columbia seceding from the US and Canada to form Cascadia. I don't expect this one to succeed any more than the previous ones.

I don't seem much national advantage to this solution either. Oregon, California and Idaho would still retain the same number of Senators, presumably from the same party. There might be a little shuffling in the House, but probably not a determinative amount. However, the rural folk in Oregon and NorCal would presumably get friendlier governments in charge.

The problem of the failure of urban dominated states (and Portland, plus a few Willamette Valley cities do dominate Oregon, to adequately represent their rural constituencies is part of the fundamental urban/rural divide in United States politics. The electoral college was one way the Founder foresaw, and dealt with the issue, giving a slight edge to more rural states. However, it did nothing to ease such tensions within a state.

Linked at The Daley Gator in Your Friday Linky Love!.