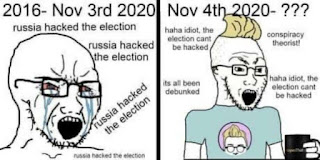 You check out any time you like, but you can never leave. The Maricopa County, Az vote audit is drawing the most attention today, with Merrick Garland's DOJ calling it all but racist to recount the votes properly. PM. DOJ threatens Arizona election audit effort, claims civil rights violations "Past experience with similar investigative efforts around the country has raised concerns that they can be directed at minority voters, which potentially can implicate the anti-intimidation prohibitions of the Voting Rights Act." At Da Caller, DOJ Expresses Concern Arizona Audit Is Violating Election Law. I express concern that DOJ is trampling on the Arizona Senate's constitutional right to police its own elections. Meanwhile, at the audit itself, NewsMax reports Maricopa County Officials Refusing to Turn Over Routers to Auditors, and Mat Margolis at PJ Media, Election Auditors Say Maricopa County Is Refusing to Provide Routers, because looking at routers is racist, don't ya know. Sundance at CTH posts a Stunning Admission – Maricopa County, Arizona Election Officials Did NOT Have Control Over Ballot Counting Machines“Officials in Maricopa County, Arizona were forced to acknowledge they did not have any control over the voting machines during the 2020 elections. ” That's comforting.  Sundance also hosts the GOP Chairwoman Gives a Daily Update on Maricopa County Ballot Audit and Details of Push-back By Arizona State Senate Against DOJ Intervention (video at link). Also, President Trump Outlines Evidence of Election Manipulation in Michigan – Lawsuit Includes Evidence of Electronic Ballot Manipulation in Antrim County "Here is a link to the pdf of the latest court filing – SEE HERE – which includes evidence of electronic manipulation." NewsMax, Trump Hammers Michigan, Wisconsin for Failing to Probe 2020 Vote Dump. https://twitter.com/TrumpJew2/status/1390473213503807489 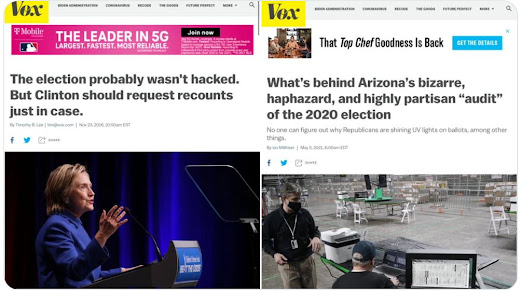 "And most of the people that they have arrested that did the damage and really were the ones doing it didn't really vote," she said.

"From what I understand, most of them didn't even vote.

I'd like to see her source of information, but it's not as outlandish as stuff "The Squad" mutters daily. HE, Kirk Calls It! One Week After His Prediction, National Police Force on the Horizon in Portland

Just one week after national thought leader Charlie Kirk posted an op-ed here at Human Events, his prediction came true: the Department of Justice may take control of the Portland Police Bureau.

Kirk argued that the progressive calls to defund the police were really a ploy to eventually create a national police force.

“Sometimes the most effective way to get what you really want is to tell people that you want the exact opposite,” Kirk wrote. “It is a subtle form of manipulation wherein you get the ‘audience’ to hear you say you want one sort of extreme thing; they, in turn, express concern and objection, so you’re able to then say, ‘I hear you. How about if we do this instead?’ That is exactly what is happening when Democrats and BLM leaders tell you that they want to defund the police.”

Tom Slater at Spiked!,  Why Trump’s Facebook ban still matters "It was a far bigger blow to freedom and democracy than those idiots storming the Capitol." Yep. Atop da Hill, Joe Concha calls Social media's ban on Trump  Our 'silence of the lambs' moment

This is a "silence of the lambs" moment for media, an industry that should be universally up in arms over the censoring of public figures or other news outlets like the New York Post, the nation’s oldest daily newspaper — before they are all led off, one by one or in groups, to be silenced and effectively slaughtered. But that’s not the case, with some journalists and lawmakers actually cheering this non-fictional version of “1984.”

‘Skynet Is A Private Company, They Can Do What They Want,’ Says Man Getting Curb-Stomped By Terminator https://t.co/aJGy7Km5uK

For those still interested in the Liz Cheney saga:
Elise Stefanik could be just what the GOP needs – HotAir
Stefanik privately pledges to serve only through 2022 in House GOP leadership – HotAir
Liz Cheney secretly orchestrated Washington Post op-ed by all ten living former Defense Secretaries | Daily Mail Online
GOP Conference Vote To Get Rid of Liz Cheney Scheduled for Next Wednesday, 9am - The Last Refuge
Liz Cheney Likely to Lose House Leadership Role as Early as Next Week | Dan Bongino
Is Elise Stefanik a conservative? – HotAir
“Liz is a living reproach to all these cowards" – HotAir
How Trump is hunting down the GOP’s leading families - POLITICO
Ace of Spades HQ The Morning Report - 5/7/21 [J.J. Sefton]
Posted by Fritz at 10:56 AM