Once dismissed, shark attacks may hit new record in 2016


As the summer beach season opens in the United States, at least one expert is predicting an increase in shark attacks around the world this year that will surpass last year's record number.

"We should have more bites this year than last," George Burgess, director of the International Shark Attack File at the University of Florida, said in an interview shortly before the Memorial Day holiday weekend that signals the unofficial start of America's summer vacation - and beach - season. 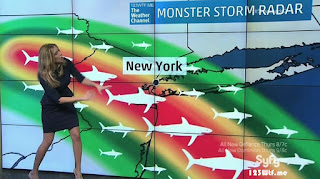 In 2015, there were 98 shark attacks, including six fatalities, according to Burgess.

Why the increased bloodshed? Shark populations are slowly recovering from historic lows in the 1990s, the world's human population has grown and rising temperatures are leading more people to go swimming, Burgess said.

More people in the water, and more sharks? Simple math would suggest more encounters between sharks and people, so yeah, it's likely.

Now all we need is a super tornado and a chain saw.

Wombat-socho has "Rule 5 Sunday: D is for Debbie"  up at The Other McCain.