Another Scandal Shipment from Clinton.com

Former US Attorney for the District of Columbia Joe diGenova unloaded on the Department of Justice in a radio interview yesterday proclaiming no charges will be brought against Clinton because “the fix is in.”

diGenova appeared on WMAL in Washington DC with me and my co-host, Brian Wilson. Here’s the entire interview and it’s worth a full lesson because diGenova absolutely unloads on the DOJ:

Judicial watch is still on the case:  Interviews in Civil Suit Over Hillary Clinton Email Server to Begin This Week. Why a Civil Case Over Emails Could Hurt Hillary Clinton More Than the FBI. Because the FBI is being blocked by Loretta Lynch?


As it turns out, Democrats spent a third of that money anyway, as Washington Post fact-checker Glenn Kessler discovered. In fact, Congress gave the State Department almost the same amount of cash in the same two budget cycles to do what they’re supposed to be doing all along — responding to Congressional oversight requests, and not just on Benghazi:


Both sides accuse the other of making unreasonable requests or taking steps that have resulted in dragging out the investigation. The list of complaints from both is rather endless, reflecting the high level of acrimony on the committee.
To put the nearly $6.8 million in perspective, the State Department received $6.5 million in reprogrammed funds from Congress in fiscal 2015 and 2016 for a new unit that responds to congressional requests, including inquiries from the Benghazi Committee, according to a State Department official. That figure does not include the efforts of the Freedom of Information Act office and legal and regional officials at the Department to re-digitize Clinton’s 30,000 emails and make them ready for public release. …
It is too facile for Democrats to pin all of the spending for the Benghazi committee on Republicans. One-third of the spending goes to Democratic staff and expenses, and that should be acknowledged in Democratic statements. Democrats choose to participate in the committee and hire staff, meaning they share in the cost as well.

On the point itself, the cost directly reflects the lack of cooperation given to the House in this and earlier probes. Hillary Clinton’s e-mail server is a sterling example of this. The State Department pushed off Congress and the courts for years by claiming she had no e-mails relating to oversight or FOIA requests, and it was only this committee’s investigation that discovered why no one could find Hillary’s e-mails. Whistleblowers are still coming forward to contradict official Obama administration versions of events, even as late as this week. It’s taken years to drag all of this out of the executive branch; considering that, the figure seems mighty low.

Think of it this way. The democrats spends one  third of the money opposing the actions of the committee, and then decry the cost, and lack of results. A perfect statement about government.

We are all shocked, shocked, to find gambling at Ricks hear that the Media will be ‘unlikely’ ally for Hillary. Hillary Clinton Memo: Ellen Willing To Use Her Show To ‘Promote’ Hillary’s ‘Agenda’ Really? Lesbians for Hillary?


“The line between daytime talk shows and hard news becomes more and more blurred as headlines in one realm make headlines in the other,” wrote Jin Chon, in a three-page memo dated January 18, 2009. Chon served as spokesman for specialty media for Clinton’s 2008 presidential campaign.


Woodward envisions 'Bill, Hillary, Chelsea' on Mount Rushmore. But it's not what you might think.

Headline of the Day, Via Ace: 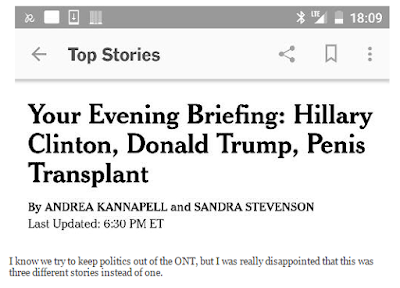 Did Hillary Just Make Her Worst Mistake Ever? in promising to make Bill her economics Czar? I dunno. That's a pretty high bar. Speaking of Bill, Hungary is objecting to his comments objecting to their democracy

Speaking last week at a rally in New Jersey in support of wife Hillary's U.S. presidential campaign, Bill Clinton said Hungary and Poland "would not be free" if not for the United States.

They would also not be free had it been left to the United States democrats, who much preferred communist dictatorships they could negotiate with.

1996 Flashback -- Bill Clinton Talks Like Trump On Immigration: "We Are A Nation Of Laws

Bernie voters showing signs of rebellion. Bernie voters are not with her: These exit polls should rattle the Clinton campaign


One of the most striking—and disturbing—takeaways from Tuesday’s West Virginia Democratic primary were exit polls that found large numbers of Bernie Sanders supporters saying if not Bernie, they would actually vote for Donald Trump next fall.

While the media likes to focus on the turmoil Donald Trump has brought to the Republicans, Clinton, Democrats Confronting Dangerous Divisions Within Party. But the Clintonistas know how to handle dissent: Why are democratic campaigns so violent? Sanders: ‘Shots Were Fired Into My Campaign Office in Nevada’; ‘Apartment housing complex my campaign staff lived in was broken into and ransacked.’

Related: Sanders sticks it to the Democratic Party: Doubts are growing about the party’s ability to unite after a contentious primary.