Why The TSA is Doomed to Suck

The almost always sensible Megan McArdle after a frustrating trip through Chicago's O'Hare Airport: Here's Why the TSA Is So Terrible, brought to you via Wombat-socho's "In the Mailbox: 5.19.16"

. . . But this is the essential logic of bureaucracy. The TSA will suffer terribly if a terrorist slips through with a bomb -- or even if the auditors make it through with a fake bomb. On the other hand, what happens to them if there are long lines? Not much. They’ve got to be there for eight hours, so why should they care if we are too? This is why government agencies tend to be much more attuned to remote risks than the real and persistent costs they impose on the rest of us.

This is also the essential problem of American security theater. Thorough screening is very expensive and time consuming, particularly because most of our airports weren’t built for this level of screening. At Reagan, my preferred airport, there’s pretty much nowhere to put another security line. 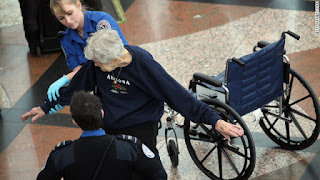 BWI has a huge area as well, but at high traffic times it gets backed up. I'm not looking forward to seeing what happens there this summer.

The easiest way to keep the lines moving is to screen less carefully. All screening faces an inherent tradeoff between false positives and false negatives; you eliminate one by accepting more of the other. When the TSA decides to crack down on the false negatives (the threats they missed), that means they get more false positives, as every person with an oddly bulging body, a forgotten bottle of water, or a penchant for impromptu dance performances, has to go through the checkpoint again. And that takes up a lot of time, during which the lines grow and grow.

A rational cost-benefit analysis might well dictate that it’s better to accept some higher risk of threats than to accept the lines. O’Hare runs something in the vicinity of 150,000 domestic passengers a day through its domestic operations. Even valuing the time of all those passengers at minimum wage, a 90-minute line costs more than $1.5 million in lost value. Now, OK, some of those people didn’t wait that long, but call it $1 million. Call it $500,000. Then multiply that times many days, many years. Even with an absurdly low value on the time of the passengers, that’s hundreds of millions in costs -- at just one of our nation’s many airports.

But that’s not how political and bureaucratic logic works. If the TSA loosens up its screening procedures to the point where almost everything gets through, the lines move -- but then there’s not really any point in having the TSA. . .

If more of government were subjected to a rational cost-benefit analysis, there would be much less government. But the government is all about expansion, benefit be damned.