Is Guccifer Giving Up Clinton.com?

The Romanian hacker "Guccifer" is changing his plea to guilty, in a sign that he is co-operating with the FBI. He could be spilling the beans on how he broke in the Ms. Clinton's supersecret basement/bathroom server. Or given the current state of the the Justice Department, the deal may stipulate that he not incriminate her:


What he can testify to -- I assume, based on his past claims -- is that he hacked Hillary's easily-hacked server, thus establishing her handling of classified US top secret documents was in fact willfully negligent as the statute requires for prosecution.

I could see that going either way.


As part of the probe, the officials said, investigators have scrutinized McAuliffe's time as a board member of the Clinton Global Initiative, a vehicle of the charitable foundation set up by former President Bill Clinton.

There's no allegation that the foundation did anything improper; the probe has focused on McAuliffe and the electoral campaign donations, the officials said.
. . .
Among the McAuliffe donations that drew the interest of the investigators was $120,000 from a Chinese businessman, Wang Wenliang, through his U.S. businesses. Wang was previously delegate to China's National People's Congress, the country's ceremonial legislature.
. . .
Wang also has been a donor to the Clinton foundation, pledging $2 million. He also has been a prolific donor to other causes, including to New York University, Harvard and environmental issues in Florida.


Maybe Obama's decided that Hillary's not polling well enough against Trump and has decided to let law enforcement nature take its (rightful) course.


Wang is a U.S. permanent resident, which means he’s legally free to make contributions to political campaigns. Why the feds are interested in his relationship with McAuliffe isn’t clear from the story. Do they suspect political contributions from ineligible foreign citizens are being laundered? Something else? Ben Shapiro notes that McAuliffe’s been accused before of influence-peddling involving Chinese citizens, but then he’s been accused of influence-peddling involving pretty much everyone. He makes no bones about how he operates, either. Ken Cuccinelli half-joked during a debate with McAuliffe three years ago that if T-Mac was elected governor, Virginia’s state motto would need to be changed to “Quid Pro Quo.” Three years later, here we are.


Then there’s Hillary’s email scandal, in which emails kept on a private unsecure server — presumably to avoid Freedom of Information Act disclosures — were deleted. Now emails from Hillary’s IT guy, who is believed to have set up the server, have gone poof.

“Destroy the evidence, and you’ve got it made,” said an old frozen dinner commercial. But now that appears to be the motto of the United States government.

So why do the rest of us bother to obey the law? And, yes, that’s an increasingly serious question.


Along with the ad, the presumptive GOP presidential candidate asks: "Is Hillary really protecting women?"

Bill is the only reason Hillary is anywhere close to the presidency so Hot Air advises:


Either way, I’ve said before and I’ll say again that I think this is the right strategy for Trump. A bumper-sticker policy proposal here, a blithe reassurance about making America great again there, and then attack, attack, attack in terms as harshly personal as possible. Keep Billary constantly on defense and smother their message, insofar as they have any message beyond “Trump is dangerous” and it’s time for a Clinton restoration. 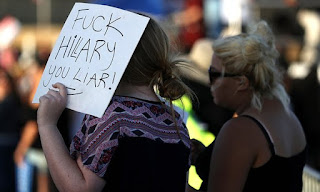 'I'm not with her': why women are weary of Hillary Clinton


. . . Pullmann feels no kinship for the secretary of state based on gender. “I actually think it’s offensive to say I should vote for someone because she has a vagina,” she says. “I do not want to be hired and promoted because I’m the diversity hire … that just insults my abilities.” Pullmann wouldn’t mind if there was never a female president, so long as male candidates are the most qualified for the job.


Clinton, who usually doesn’t speak to Latinos in non-election years, was clumsy during her 2008 presidential bid when she tried to connect to Latinos at a Las Vegas restaurant by referring to their problems as “chips” and “guacamole.”

Via Wombat-socho's "In The Mailbox: 05.23.16" Joe for America remembers the '80s "Without Hillary's Nose-Candy, She's a Raving Maniac" in response to concerns about Trump's temperament. We're having our first cokehead president, and that's not working out so well.

Sen. Sessions: Hillary Clinton the most anti-2nd amendment candidate ever Let's make a deal; they can have abortion and we can have guns.

Over at Insty's AN IMPORTANT QUESTION raised by Scott Adams. Is it #HeartlessHilary? Or #CrookedHillary? Why choose when both are true?

Podhoritz: Rat Pack vs. the hippie: Trump and Clinton are from opposite ends of same decade. An interesting essay.

From the Beastly: Hillary Clinton Is the Jeb Bush of the Left.


There were similarly reverential pronouncements of inevitability when Hillary Clinton released a sunny YouTube video announcing her presidential plans. Like Jeb, she put in the time in the policy trenches. She earned it. And like Jeb, she literally spent decades meeting donors, building teams, growing trust with party officials, fostering loyalties—doing everything right. Jeb and Hillary headed into their parties’ respective primaries with godlike name ID’s and rapper money. And everyone freaked out; the parties, after all, would decide—so how could they not win?

Man, that has to hurt. Better put some ice on that, too.


It should surprise no one that she’s the same candidate whose energy plan includes additional federal funding for natural gas pipelines. Bernie Sanders, meanwhile, leads millennials in sing-alongs.

And speaking of the Bern:  Clinton declines to participate in California debate. What if Bernie Is Right About Hillary? (Even if he is, it is too late). Hey Sanders Saps, Hillary Is Laughing At You! What Are You Gonna Do About It?


Well, you’ve had your fun, and now it's time to shrug your shoulders and fall-in behind Hillary. She beat you fair and square, by which I mean she used the party rules designed to make you dopes think you really have a voice in steering Democrat policy to cheat you out of the victory you earned. The fix was always in – she was always superciliously assured that her superdelegates were going to supersede your adorable attempts to attract actual votes from actual voters.

So get ready to give up. To give up your dreams. To give up your hopes. To give up your dignity.
. . .
You really are just doofy posers in stupid sandals. You're going to vote for Goldman Sachs’s golden girl, the chick who loves NAFTA, the man-hating harpy who wants to snip off what makes you Bernie bros bros. And you are going to crawl over to her throne on your bellies, tenderly lift her pantsuit cuff off of that swollen cankle, and tongue-kiss her sensible shoe.

And, right on schedule, Dems call for unity as Sanders fuels intraparty fighting. Go, Bernie go!
Posted by Fritz at 9:19 AM