Being Objectively Objective About Clinton.com


A conservative group engaged in a series of lawsuits seeking emails from Hillary Clinton's private server is asking a federal judge to order her to give a sworn deposition.

Judicial Watch filed the request Monday with U.S. District Court Judge Royce Lamberth. Lamberth had previously agreed to allow the group to take discovery in the case in an effort to establish why the former secretary of state and likely Democratic presidential nominee used a private server and whether it was to put records beyond the reach of the Freedom of Information Act.

"Mrs. Clinton’s testimony will help the courts determine whether her email practices thwarted the Freedom of Information Act,” Judicial Watch's Tom Fitton said in a statement.

I predict a cold day in Hell before Ms. Clinton swears to tell the whole truth and nothing but the truth.
Wall Street Analyst: Clinton Charities' Finances Are So Convoluted and Dodgy It Rises to the Level of Fraud


It's really amazing that this crew put together a "charity" to enrich themselves and pay off their friends -- their shadow government in waiting -- and no one really bothered to look into it before recently.

I think the concept of it -- of a former president and his morally diseased wife just creating a sham charity to raise billions for themselves -- was just so brazen that few even suspected it. Even the Clintons' longtime opponents didn't figure they'd be this corrupt.

After more than a year of research, a Wall Street analyst is arguing the Clinton Foundation's books are riddled with financial inconsistencies that rise to the level of "fraud."
Charles Ortel, who gained recognition for correctly identifying problems with General Electric's financial statements in 2008, has prepared 40 reports highlighting discrepancies that he said proves the Clinton Foundation has covered up cash flow since 1997.
The financial whistleblower said his 15 months of research revealed gaps in the amount of money donors claim to have given and the amount of money the foundation claims to have received. ...

From 2000 until now, the Clintons were on their very best behavior, to preserve Hillary's electoral viability.

In that period, they created a sham charity for personal enrichment and to pay off their cronies they could get government jobs for and put American secrets online for the Russian and Chinese and Iranian intelligence agencies to pilfer.

That was the Clintons at their finest.

What happens when they no longer have to care about the law at all?

Trying to capture that old magic of the tech bubble (not to mention the payback from the Savings and Loan crisis that Bush I forwarded to him) Hillary Clinton will put Bill “in charge of” revitalizing the economy.  And that brings us to 5 undeniable truths connected to Hillary’s plan to put Bill in charge of the economy


1. Hillary’s conceding that Obama’s disastrous economy needs “revitalizing”
2. Bill Clinton will be given enormous power and responsibility without being vetted or confirmed
3. Bill’s past (and current) “naughty” behavior is fair game
4. Hillary’s admitting that she needs her husband’s help
5. Every single corporate relationship the Clinton’s got rich from deserve extra scrutiny from the media

All of which were true before she promised to put "The Big Dog" back in charge.

Via Wombat-socho's "In the Mailbox: 05.16.16" Meanwhile, At The Nevada Democratic Convention fights break out between Hillary and Bernie supporters:

I'm sure Donald Trump will somehow get the blame for this.


If you think things are bad on the Stupid Party side of this fall's election, take a look at what's happening across the aisle with the Evil Party. The waddling Dowager Empress of Chappaqua is unable to put away a doddering old "socialist" who's never had a real job in his life, while the specter of Donald Trump creeps increasingly closer to Lady Macbeth's falling poll numbers. . .


"I personally do believe in the golden rule, and I don't think it means, he who has the gold, rules. It means, it means, as you well know, what we're supposed to be doin' fer each other," Clinton said. "Your governor did such a great job and your current governor is trying to undo it all. Undo it all."

When the protester rejected her claim, Clinton rebuked her.

"Oh yes it is, ma'm. Yes it is. Yes it is," Clinton said and nodded as the crowd booed.

Clinton said that the woman was factually incorrect and blamed "Republican propaganda."

Speaking of facts, ‘Objectively’? This snippet from a WaPo piece on Hillary is ‘perfectly wrong in all ways’ 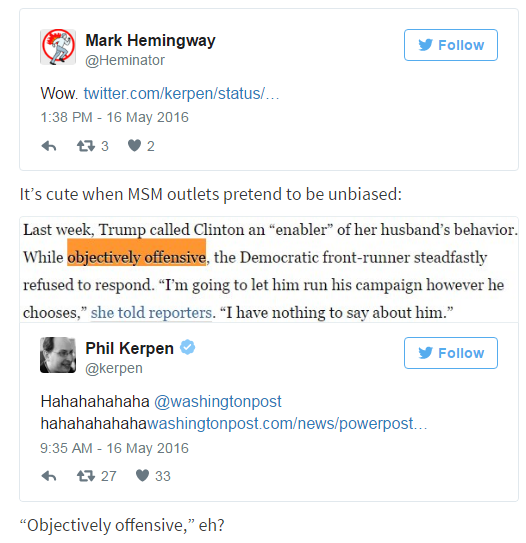 Do we really need to post the YouTube of Mandy Patinkin saying "You Keep Using That Word, I Do Not Think It Means What You Think It Means" again? Or you could read that sentence to say that the Democratic front-runner is objectively offensive, and I'd be forced to agree. . .
Posted by Fritz at 9:50 AM