From Pirate's Cove Hillary Totally Wants Other People To Pay For Child Care.

Why stop at Child Care. She wants people to pay for nearly everything. Slow rolling socialism.

Althouse is on another tear, with Hillary's new slogan: We Are Stronger Together. Kind of like a bundle of sticks; maybe that should be her new emblem and "On Meet The Press Hillary said she'd consider Mark Cuban (or some other non-politician) as possibility for VP, what do you guys think?" Well, if she wanted a rich businessman with some liberal ideas, I know of one. "It is the first time Trump has vaulted over Clinton in the poll and shows the advancement of the New York businessman over the past six months."


"But instead of focusing on Trump's surge, the Post highlighted the feeling among the unfavorable view voters have of both candidates, and that Clinton is more qualified."

Of course, the fact that he's hated by the press is one of his more attractive points.

"Melania Trump joined us on the patio; Trump doted on her throughout the meal, often touching her shoulder or leg and calling her 'baby.'" Yes, I know it's about Trump, but:


I'm fascinated by the concept of "normal" in relation to Trump. Have you noticed how hard many people — including Hillary — are working to frame Trump as non-normal?

Ah, yes, here's Hillary on that same "Meet the Press" episode. She was asked whether she was going to accept the invitation to debate Bernie Sanders before the California primary. She answered — infuriatingly — "You know, I haven't thought about it." How is that possible? That's an unforced lie.

And then she immediately — figure out this train of thought — segued to "But I think what's important is we're not going to let-- at least, my campaign is not going to let Donald Trump try to normalize himself in this period."


So Hillary wants us to "normalize" on somebody that hasn't driven in 25 years, doesn't know how to order at Chipotle, travels in a bubble where the people she interacts with in are usually loyalists who are pre-chosen as actors in a choreographed event? Someone who is carefully shielded from all media questions...

A person who has sold influence on a breathtaking scale never before seen? A person who setup a private email server specifically and knowingly to evade public transparency and accountability is now to be considered "normal"?

A person with a dubious past where people get fired and files go missing? A person who repossessed real estate from borrowers and defended sexual assaulters with a laugh? An enabler and enforcer of her husband's behaviors in ways that is far from most Americans' sense of normal?

Good luck with that Hillary!! Maybe when you are not dodging sniper fire you can get back in touch with real life!

The long and the short view of the Trump vs. Hillary trend in the polls. 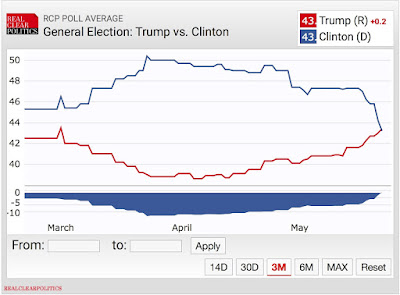 Her point is that he's been almost this close before, and lost it again. True, but that was before he was effectively the nominee. Does that matter? We'll see.

A liberal feminist: Hillary Clinton says Bill won’t be picking out the White House china. He should. This seems to be written from a "men deserve a take down" point of view. Anyway, Bill won't pick the china, her wife, Huma, will.

The Last Tradition: How Hillary is a High Priced Call Girl: How corporate America bought Hillary Clinton for $21M Say what you want, but don't call her a cheap whore.

Run as Barack's Heir or Bill's Heir, that is the question: Tough question for Clinton on economy: Are you better off? She's trying to triangulate.


I ask Democrats, is this your nominee? The winner of your presidential nomination has lost just shy of 80 percent of her races coming down the homestretch. If Hillary were a racehorse with that record, she’d be sent home.

The Democrats may be revolting but Hillary Clinton say  Bernie Sanders Has The Right To Stay In The Race, But she believes she will be the Democratic nominee.