A Big Showing at Clinton.com

I've got a really, really big Shew for you all today...


“There’s a debate going on in the Kremlin between the Foreign Ministry and the Intelligence Services about whether they should release the 20,000 of Mrs. Clinton’s emails that they have hacked into,” Judge Andrew Napolitano told Megyn Kelly on Monday.

It's not like Hillary actually cares about secrecy, expect to keep hers from the American public.
Email reveals Hillary used standard phone line when secure line failed:


Judicial Watch uncovered the email exchange from February 2009 between the presidential candidate, her then Chief-of-Staff and bag man Cheryl Mills and at least one other party whose name was redacted from the exchange : (The Hill)


“I give up. Call me on my home #,” Clinton told then-chief of staff Cheryl Mills in a February 2009 email, after more than an hour of trouble trying to communicate via a secure line.
“I just spoke to ops and called you reg line – we have to wait until we see each other b/c [the] technology is not working,” Mills said in another email sent at almost exactly the same time.“Pls try again,” responded Clinton, a few moments later.

She probably needed a yoga routine or something else trivial.


Gowdy went on to question Hillary Clinton’s October testimony before his committee where she claimed the military was asked to intercede but they determined they couldn’t get to Benghazi in time. This is an oft-repeated claim, but it doesn’t make a lot of sense. As investigative reporter Sharyl Atkisson puts it:

Clinton says during attacks they checked to see if military could get there "in time." In time for what? It went on for 7+ hrs and...
— Sharyl Attkisson (@SharylAttkisson) October 22, 2015

...nobody knew at the beginning when it would end. In fact, Clinton also sez they thought it might spread to other embassies for days.
— Sharyl Attkisson (@SharylAttkisson) October 22, 2015


Uh oh. Bad news for the Clintons. Comey on Clinton: ‘There are no special rules for anyone under FBI investigation’ I'd like to know the color of the sky on his planet. Debby Wasserman-schultz knows otherwise. DNC chair: I’ve been told that Hillary isn’t a target of the FBI secret-server probe. When pushed though, she couldn't name her source.

I mean, why would anyone be friend of the Clintons in the first place: Clinton charity arranged $2M pledge to firm owned by Bill’s ‘friend’. Oh yeah. About 2 million reasons. Plus one of them is a hot cougar, thought by some to be one of Bill's "extracurricular activities". Ace notes:


The "charity" is supposed to give to other "charities" engaged in public service -- but this wasn't. This was a privately-owned company engaging in a for-profit scheme.

The WSJ dryly calls such a donation "atypical."

And you wonder where the Clinton Foundation gets the money to give to it's friends? Standing on the backs of dead "kids." Hillary Clinton to Deliver Speech at $1500 Per Person Trayvon Martin Event.  Persian Gulf Sheikhs Gave Bill and Hillary $100 Million. No conflict of interest for a Secretary of State there. And yet, Bill Clinton Insists CGI Did Not Break Law.

No apology, no rebate! Chelsea Clinton's contemptuous husband Marc Mezvinsky has ‘nothing to say’ to his investors (some Hillary contributors) despite losing 90 percent of their millions. That's OK. I'm sure he still collected his management fees. That's what you get for trusting someone in the Clinton clan.  I wonder if papa Bill invites Marc on his rides on the "Lolita Express". Bill Clinton took 26 flights with sex-offender Jeffrey Epstein. It would seem like a way to break the kid into the business, after all. Clinton apparently shook his secret service detail for these "events".

Mark your calendars: Obama administration preparing immigration raids in May and June And this relates to Hillary how?


While Hillary will be seen as the third term of Barack Obama in many ways, this gives her an opportunity to shift the onus of these raids from Democrats to Republicans with voters. Hey, I oppose these raids, Hillary will claim, and if Trump gets elected they’ll only get worse! Furthermore, thanks to this leak, Hillary can make that argument well before DHS gets its operations under way, allowing her to frame the issue to her benefit. If the scale of these raids is the same as those in January, their explicit impact will be felt by few, but the political impact will still be wide.


I’m sorry, Democrats, but Hillary Clinton is dreadful. I’d ask where you found her, but we all know, and no one wants to hear that story again. Hillary Clinton is a government-expanding nightmare with a humorless cackle. Her soul appears to be filled with leftover ice from a cooler containing lobsters. She is under federal investigation. She lies almost as much as Trump, but with less charm and aplomb. For some,  with the help of 2016 Goggles™, she makes Donald Trump look like the political version of Chris Hemsworth.

And last, our moment of levity courtesy of The People's Cube:  DNA test traces origins of Hillary cackle to hyena ancestors 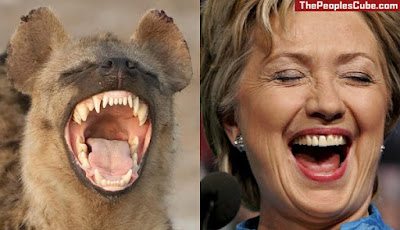 "The cackle, the facial expressions, and the predisposition to dominate males were the first behavioral clues," wrote Dr. Crumlin, referring to a known scientific fact that spotted hyena society is matriarchal; females are larger than males and dominate them in a pack, with even the lowest ranking females being dominant over the highest ranking males. ''The males are so nervous around females that it's very easy to tell them apart," he observed, "even if everyone in the room is wearing pants."