Lumbering Through the Email Crisis at Clinton.com

Well, the world is still reverberating from the effects of the State Department Inspector General's report on Mrs. Clintons emails. Some reactions:

The Observer observes, Game Over: EmailGate Just Crippled the Clinton Express. Oh, would that it were so simple. Levin: Hillary didn’t break email rules, she broke federal law

Tom McGuire at Just One Minute is not so sure:


IANAL and someone can doublecheck but when I looked recently my conclusion was that these [the record-keeping stuff, not the handling classified info stuff] are administrative, not criminal violations. Utter disdain for the FOIA, for example, earns a dressing-down from one's supervisor or a federal judge, not fines or imprisonment. Back to the WaPo. . . .
. . .
I guess a contempt of court finding could result in jail time but it is still not a felony, as best I know. Still, what a weird Hillary defense - she broke the law but the penalties are minor, so what's the big deal? Uhh, she broke the law? And now wants to be Chief Executive?

TO BE CLEAR: I am focusing on the record-keeping violations, not the potential mishandling of classified information.

Even the usually compliant liberal media was getting a bit uppity: ‘Looks as If She’s Got Something to Hide’: Blitzer Grills Hillary Spox on Email Report, Chuck Todd to Hillary: This IG report contradicts your previous statements, doesn’t it?, and Even Andrea Mitchell Calls Bullshit on Hillary Surrogate's Lies on the IG Report on Her Illegal Emails. Izvestia, excuse me, the LA Times editorialized Hillary Clinton still has an email problem — and denial won't make it go away. But she'll give it the good Clinton try.

As found at Wombat-socho's "In the Mailbox: "05.26.16", Twitchy finds her a Pretty [lousy] little liar: Hillary offers up bogus new excuse for violating email use rules, that the rules were "clarified" after she left office and the Lonely Conservative notes Hillary’s Email Problem Has Gone From Bad To Worse.

A naive State aide thought Clinton email was for ‘family and friends’ Like Russia and China.

Most competent woman available? Welp… Hillary doesn’t know how to use a computer. Old dogs and new tricks, eh?


So what to make of this revelation, via Daily Caller?


As Secretary of State, Hillary Clinton never used a password to protect her computer emails, and she was clueless about how regular emails work on a conventional computer, according to a deposition of a foreign service officer at the State Department.

Guccifer going to the pokey: Hacker who claims he breached Clinton server pleads guilty, strikes deal with feds 7 years and $500k in fines:


But the plea deal comes as the FBI is moving to conclude its investigation into Clinton’s exclusive use of a private server for government business while secretary of state. Lazar, who was facing more than 20 years in prison and cut what amounted to a very favorable deal, is currently being held in a Virginia jail – which means he will be available to the FBI and U.S. attorney.

As outlined in the plea agreement which Fox News has reviewed, Lazar has agreed to extensive cooperation with the U.S. government. According to the court filing, Lazar has agreed to be "reasonably available for debriefing and pre-trial conferences as the U.S. may require." The document states: “The defendant agrees to testify truthfully and completely at any grand juries, trials or other proceedings.”

Additionally, Lazar has agreed to provide all documents, writings, and recordings within his custody to the U.S. government that may be relevant to investigations or inquiries.


A Navy sailor entered a guilty plea Friday in a classified information mishandling case that critics charge illustrates a double standard between the treatment of low-ranking government employees and top officials like former Secretary of State Hillary Clinton and ex-CIA Director David Petraeus.

Prosecutors allege that Petty Officer First Class Kristian Saucier used a cellphone camera to take photos in the classified engine room of the nuclear submarine where he worked as a mechanic, the USS Alexandria, then destroyed a laptop, camera and memory card after learning he was under investigation.

Last July, Saucier was indicted on one felony count of unlawful retention of national defense information and another felony count of obstruction of justice. He pleaded guilty Friday to the classified information charge, which is part of the Espionage Act, a prosecution spokesman confirmed. No charge of espionage was filed and no public suggestion has been made that he ever planned to disclose the photos to anyone outside the Navy.

The sailor now faces a maximum possible sentence of up to ten years in prison, but faced up to 30 years if found guilty on both charges. Federal guidelines discussed in court Friday appear to call for a sentence of about five to six-and-a-half years, although the defense has signaled it will seek a lighter sentence.

But note, his last name is not Clinton, and I doubt his name can be found in the donor files at the Clinton Foundation.

Democratic strategist Joe Trippi begs Hillary, let your superdelegates go! while Roger L Simon asks if After IG Report, Will Bernie Have the Guts to Take Hillary Down?

The Wall Street Journal notes His and Her Clintonomics - Hillary says she’ll use Bill on the economy, but her policies are to the left of Obama’s.

Whiny lefties in the media Networks Complain About Trump's Anti-Hillary Ad, but I'll bet they spend his money. Speaking of smears, PoliticiFact finds bogus Hillary Clinton claim about Donald Trump paying no federal taxes ignores the years when he did. Did she learn that trick from the disreputable Harry Reid, or did she show it to him? And more via Insty - Well, when your only tool is a smear machine. . . Kirsten Powers: Hillary Smearing Voters She’ll Need Later. 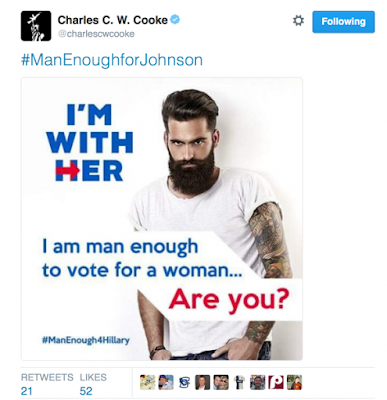 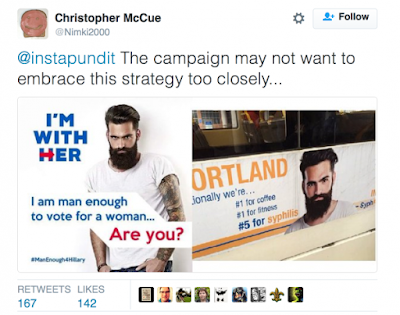 What? Enemy action? Even better!
Posted by Fritz at 2:24 PM