Does this DOJ memo hint that criminal action against Hillary is forthcoming?


Last week, Vice News reporter Jason Leopold formally protested the classification of an FBI declaration that provided details about the investigation into how sensitive information ended up on Clinton’s private email server.

The Justice Department submitted the declaration as part of “a secret filing,” but a U.S. District Court judge ordered them to publicly submit a redacted copy of the document or at least “show cause why” that isn’t possible.

They responded in kind by saying they couldn’t make the document public because it would “adversely affect the ongoing investigation” into Clinton’s private email server.
Fair enough, but it is two words further into the DOJ memorandum that will be sure to raise some eyebrows. The department claims it can’t reveal the document because doing so could “reasonably be expected to interfere withenforcement proceedings.”


Attorneys with the U.S. Department of Justice say they cannot make public a classified FBI declaration because it would “adversely affect the ongoing investigation” into Hillary Clinton’s private email server. The recent filing by DOJ attorneys, obtained by LawNewz.com, is significant because it not only acknowledges the ongoing federal probe, but also asserts that if the declaration is made public, it could “reasonably be expected to interfere with enforcement proceedings.”

Enforcement proceedings? Does this mean the FBI has found enforcement to be necessary?

What If Clinton Gets Indicted? Karl Rove explains what might happen at the convention.


An indictment of any higher-up in Clinton World would produce a royal mess for Democrats. You can bet there are wise strategists in a backroom somewhere gaming this out, just in case.

Clinton Foundation Got $100M From ‘Blood Minerals’ Firm I wonder what they wanted. . .


A little known Swedish-Canadian oil and mining conglomerate human rights groups have repeatedly charged produces “blood minerals” is among the Clinton Foundation’s biggest donors, thanks to a $100 million pledge in 2007, a Daily Caller News Foundation investigation has found.

“Blood minerals” are related to “blood diamonds,” which are allegedly mined in war zones or sold as commodities to help finance political insurgencies or despotic warlords.

Althouse is still on a roll with David Brooks finds it hard to understand why Hillary Clinton is so disliked when she has "dedicated herself to public service.",  She's "pursued her vocation tirelessly." He calls this a "paradox." But her vocation is politics. Who likes politicians, besides David Brooks. She also has "No one wakes up with a passion to pursue togetherness. Half of the country is comprised of introverts, loners, and competitive a-holes."


"Those folks want less togetherness, even if they mean it in an entirely different way. On an irrational level, togetherness – in all its forms – is simply not a universal desire. Compare that to making America greater, which is all good, all the time, to all Americans."

and Fan reaction to the news that Hillary Clinton will appear on the same Ellen DeGeneres episode as the actresses from the new "Ghostbusters." Not good. Most women don't go to movies like that, and now men won't want to go to this one, Winner!Finally, reading the NYT so we don't have to: A NYT headline: "Kenneth Starr, Who Tried to Bury Bill Clinton, Now Only Praises Him."


The presumptive Republican nominee, Donald J. Trump, increasingly seems to be trying to relitigate the scandals that Mr. Starr investigated, dredging up allegations of sexual transgressions by Mr. Clinton to accuse Hillary Clinton — the likely Democratic nominee — of having aided and enabled her husband at the expense of Mr. Clinton’s female accusers.

"Sexual transgressions" makes what Bill Clinton did sound merely naughty and therefore forgivable. Submerged is the lying under oath, the sexual harassment in the workplace, and — as Donald Trump says (in what is definitely not relitigation) — the allegation of rape.

Via Wombat-sochos "In the Mailbox: 05.24.16" Two-Faced Clinton Pretended to Oppose Fracking in NY, Pimped It to Other Countries Behind the Scenes. I don't think she pretended to oppose fracking in the US; it's a general dogma in the Democrat Party, but to oppose it in the US and push it elsewhere shows that it isn't about Climate Change or environmentalism, it's about killing the US economy.

Report: Hillary Dropped Gender Talk After Negative Internal Polling Seriously; why would a man support Hillary knowing that she hates him, and all men, at least all the ones not immediately subservient to her majesty?

Nothing new here, but he says it so well. Victor Davis Hanson: Hillary’s Sputtering Campaign


"At least eight reasons come to mind — several of them relating to Clinton’s innate character flaws and past scandals."

Not to be outdone, Rich Lowry: Hillary still can’t explain why she should be president


If Donald Trump wants to make America great again, Hillary wants to keep it OK; if Bernie Sanders wants to incite a political revolution, Hillary wants to convene a task force to come up with options short of a revolution, to be studied closely for a decision at a later date. In an election season buffeted by gale-force winds of change, Clinton is the status quo rendered in the most stultifying conventional fashion possible.

Trump sets Salon quaking in their boots penny loafers. Donald Trump is going to win: This is why Hillary Clinton can’t defeat what Trump represents

A whole bunch of  reasons Why 'Crooked Hillary' is likely to stick Just one:


But what does the public find more shameful? Is it the businessman who looks after his own interests, using government to smooth his real-estate business and casino interests? Or the government official, who prostitutes the public offices she uses, not only for personal gain, but sometimes in ways that work to legitimize human-rights abusers in Africa, or enrich shady Middle Eastern business concerns, or give Russian companies greater access to weapons material? We're going to find out.

Harry Reid: ‘Hell no’ Hillary shouldn’t pick Warren as VP Reid not that confident of gaining Senate.
Is Hillary transangulating? Sanders responds to trans group questionnaire — but not Clinton. 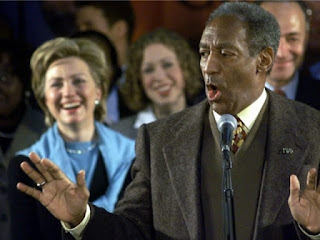 
A judge has ruled that there is enough evidence that the case can go forward.

If convicted, he could be sentenced to ten years in prison.

I think it's very important to remember that these are only charges and nothing has been proven. Whether he is a serial rapist or not is a fact known only to him and all the women he raped.

It's got to make Bill a little nervous to see them reach back to the to 60s and 70s for a sexual abuse case.

WaPo: Trump escalates attack on Bill Clinton. BOOM! Eric Trump Slams Hillary: She Has 730 People Working on her Campaign and She Hasn’t Beat a Single Socialist


“She has 730 people working on her campaign staff. We have 70. She’s spent $180 million on her campaign so far and she hasn’t beat a single socialist. My father has knocked off 17 other people and he’s spent fifty. I mean that’s the difference between a businessman and a politician.”

Hillary reneged on a debate with Bernie Sanders in California. Hey, Remember Hillary’s outrage when Obama wouldn’t debate in 2008?