Circles and Circles at Clinton.com

You know whose fault this is?

You know the answer -- the Female Ghostbusters', that's whose fault it is.

Clinton Rape Accuser Blasts Biased NBC Anchor - Juanita Broaddrick claims  Network's correspondent 'Lisa Myers actually warned about Andrea' Mitchell. She shouldn't need to be warned by now. But poor Bill, 'I sometimes feel that I'm totally useless in this election season.' Why put a time limit on it? Gail Collins at the NYT feels the same way: Subtract One Clinton. And our European allies? Europe’s Leaders Blast Bill Over Democracy Jibe: ‘The Mouth Belongs To Clinton, The Voice Belongs To Soros’ The French felon George Soros is fondly remembered for "breaking" the Bank of England while earning a billion bucks. Politico reports that it has obtained a copy of the transcript of a speech Bill gave to “China-U.S. Private Investment Summit” in Austin, Texas last year. In it he said:


“Once I got a cartoon in the mail when I was fighting out that Whitewater business,” he reminisced in front of about 60 Chinese investors and 150 American businesspeople gathered to discuss bilateral investment opportunities in late March 2015 — two weeks before Hillary Clinton officially declared her candidacy. “And Jiang Zemin and I are sitting together at a state dinner, and in the first frame, I say to President Jiang, I said, ‘You know, you’re doing great economically, but our country has more human rights.’ And he looked at me and he said, ‘Yes, and if you were the leader of China, Ken Starr would be in prison making running shoes.’”

A self-deprecating Clinton admitted of those scandal-tarred days of his presidency: “I saved that cartoon for a long time. I must say there were days when I wondered who had the better model.”


Dickerson’s first instinct is almost certainly correct. Get on Donald’s bad side and you’ll end up spending a short time in a firestorm of personal attacks. Get on Hillary’s bad side, and prepare to spend a long, long time out in the cold … unless she needs you for something.

Sanders responds to Clintons’ ‘I will be the nominee’ claim


Yesterday I wrote about a claim Hillary Clinton made during an interview on CNN. Clinton interrupted host Chris Cuomo to say, “I will be the nominee for my party, Chris.” Well, it turns out Bernie Sanders did not like that very much. A spokesman for his campaign issued a response Thursday evening:


In the past three weeks voters in Indiana, West Virginia and Oregon respectfully disagreed with Secretary Clinton. We expect voters in the remaining nine contests also will disagree. And with almost every national and state poll showing Sen. Sanders doing much, much better than Secretary Clinton against Donald Trump, it is clear that millions of Americans have growing doubts about the Clinton campaign.

There’s a lot packed in to that relatively brief statement. First of all, Sanders is rubbing it in that he is still winning contests even after the math suggests Clinton will be the nominee. The message is that Bernie and his people are not ready to settle. That’s something we saw in the CBS/NYT poll released Thursday which showed that 8 out of 10 Sanders supporters want other options, i.e. other than Clinton.


There are two ways of looking at the Hillary campaign:

The Clinton campaign & their media allies are analogous to the French army before World War 2.  Completely prepared to fight the last war but unable to cope with a foe prepared to do the unexpected.

But I think the real answer is this:  Hillary Clinton is the worst Democrat candidate for national office since Martha Coakley.

She has all the unappealing qualities of Ms. Coakley in terms of temperament and presentation, Her campaign also has the same air of entitlement that Coakley had.

That is bad enough but she also has one disadvantage that Coakley for all her ineptness did not.  The Email Scandal, Benghazi, the Clinton Foundation and more.

Hillary Clinton has become a byword dishonesty and corruption.  It’s no coincidence that the Donald’s Tag line for her is #corrupthillary

Ann Althouse (yes, she's on a roll over Clinton) notices a Ludicrous headline at The Hill: "Clinton fury with Sanders grows."


It seems to me that running material like this as if it were news of some kind is just embarrassing evidence that the media really, really want to help Hillary.

Beyond that, it makes Hillary seem so ineffectual, like she's stamping her foot and fuming you make me so, so angry.

and helpfully adds this video of the lovely Amy Adams:

Ann also takes on Trump's statement "She's not equipped to be President — in so many different ways."

No, evoking truthfulness, morals, ethics, intelligence, health, and so on. 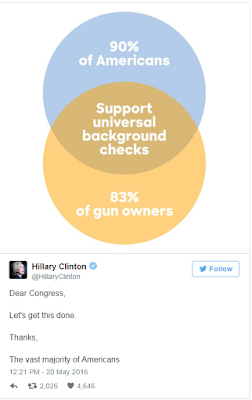 
FiveThirtyEight's Ben Casselman put it succinctly on Twitter: "This isn't remotely how Venn diagrams work." (His tweet, as of writing, has more retweets than the Clinton campaign's.)

Ann's response:  It depends on what the meaning of "Venn diagram" is...


Just because 2 overlapping circles are used in a graphic doesn't mean it's a Venn Diagram.
. . .
How sexist the critics of Hillary's circles are — so eager to jump to the conclusion that she's not good with the graphic depiction of numerical data and doesn't know what a Venn diagram is. To laugh at a woman this way is deliberately to tap into the sexism that lies within the heart of the American voter. All the more reason to embrace the first woman President, to fall into the loving arms of a soothing presence who does not demand analytical precision as we look at the pretty shapes.

I'm just shocked, shocked that either the Clinton campaign is too stupid to understand Venn diagrams, or is using deceptive tactics. But why choose when it can be both.
Posted by Fritz at 12:06 PM