A Bumper Crop at Clinton.com

I swear, I only let it go one day, while I caught up on Obamacare Schadenfreude, and there were only three links in the bin, but by this morning. . .


No one is tasking me with spinning this in Hillary's favor, so I won't even try. But Paul Waldman of the Plum Line heroes up!


That point about her intending to break classification rules is important, because in order to have broken the law, it isn’t enough for Clinton to have had classified information in a place where it was possible for it to be hacked. She would have had to intentionally given classified information to someone without authorization to have it, like David Petraeus did when he showed classified documents to his mistress (and then lied to the FBI about it, by the way). Despite the enormous manpower and time the Justice Department has devoted to this case, there has never been even a suggestion, let alone any evidence, that Clinton did any such thing.

Uh huh. Where was Waldman to explain that to Sandy Berger, who simply intended to study some National Archive documents in the comfort of his home or office. And of course, there is the famous 'smoking email' in which Hillary instructed an aide to strip the classified markings from a balky document that wouldn't go through a secure fax and send the darn thing by email. Apparently the aide didn't actually do that, so maybe all is well?

Well, that's their spin and they will be sticking to it.

Meanwhile, the State Dept. struggles to find any evidence from Brian Pagliano, the supporter turned computer tech who ran Clinton's secret sauce server out of Chappaqua while serving as special Appointee to State: We still can’t find any e-mails from Hillary’s personal IT tech; Update: One found. I guess he really knew what it takes to delete emails.


This brings up more than one question, too. Did the State Department find e-mails from other IT techs in their employ who weren’t involved with Hillary Clinton’s e-mail server? If so, then why are Pagliano’s missing? That would indicate some intent to deceive, although if it was Pagliano who did the erasing totally on his own volition, then it’s a moot point; he already has immunity. If he got ordered to erase his digital trail and was willing to testify to it, then that becomes a problem for somebody else, and would go a long way to proving malign intent in the operation of the secret server.

And the FBI is showing signs of being ready to shit or get off the pot. Clinton’s Mother’s Day present? FBI close to end of investigation. Decision time for FBI on Clinton. Applying the "Ignorance Defense"


Since none of the documents were marked as classified at the time, Pollack said, prosecutors would either need to find a clear pattern of Clinton or her aides sending emails with obviously sensitive information, or else prove that the system was created to circumvent existing rules.

The latter is self-evident.

This article in the Post yesterday was probably meant to cheer on Federal workers, their biggest customer, and part of her base: Clinton's Agenda is full of small steps: and expensive as hell, too.


“I also believe in affordable college, but I don’t believe in free college,” Clinton said at a debate in February, attacking Sanders’s simple, huge plan to make tuition free at public colleges. “What I want to do is make sure middle-class kids — not Donald Trump’s kids — get to be able to afford college.”

Clinton’s solution for college is cheaper: $350 billion over 10 years, versus $750 billion for Sanders.

But it’s not simple.

Clinton’s plan is to determine what families can afford to pay, without borrowing, and provide the rest of the money as a grant. But that requires fine-grained bureaucratic determinations to find the right number for every family.

She also wants to help students by extending a tax credit that has a history going back to the tenure of her famously wonky husband. It can be worth up to $2,500. But only if students find their Form 1098-T, then fill out the relevant portions of Form 8863, then enter the amount from lines 8 and 19 of Form 8863 in lines 68 and 50 of their Form 1040. Just like that.

Have you seen Hillary's six step plan to disarm the American people? 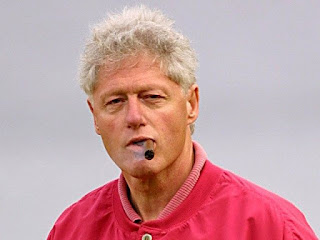 MSNBC whitewashes Clinton sex scandals as 'allegations'. I'm shocked they mention them at all. NBC Scrapped Story About Bill Clinton Rape Accuser Because She Didn’t Have ‘Anything New’ To Say. See, that's how the pros handle it. Breitbart lays out The Women Who Claim to Be Victims of Bill and Hillary Clinton.

As Hillary Plays the Woman Card, More Men Are Being Dealt Out Just shut up and man your oars.

A pro-Hillary Harvard students decries their treatment at the hand of the Bernie Bros: 'I've been silent': Harvard's Clinton backers face life on a pro-Bernie campus. Now imagine what it's like for a conservative student.

Conservative humorist P.J. O'Rourke vows to vote for Hillary, saying that she's "wrong about absolutely everything. But she’s wrong within normal parameters!” Kurt Schlichter, on the other hand says "I Am Going To Vote For Trump Though It Makes Me Want To Projectile Vomit":


I choose to vote for Trump not because I like the cut of his jib but because Hillary Clinton is an extinction-level menace who is likely to literally destroy the United States of America. We're strong enough to deal with an idiot. I don't think our culture is strong enough to deal with a committed, focused leftist monster like her. That’s my reasoning. That’s why he will get my vote. That’s the only reason he will get my vote.

Pretty much my reasoning.
Posted by Fritz at 9:44 AM