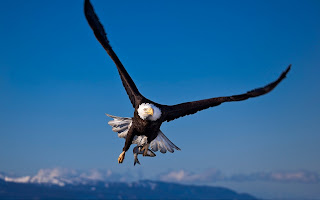 Wildlife advocates and proponents of wind energy visited the White House, meeting with the Obama administration over a regulation that would extend the length of permits that allow energy companies to unintentionally kill protected eagles.

Last week, representatives from four conservation organizations and the American Wind Energy Association (AWEA) got together with administration officials to talk about the rule, which is currently under review at the White House’s regulations office.

Though two-dozen high-level advocacy and government representatives were present, they weren’t able to pound out a final consensus on the disputed regulation. 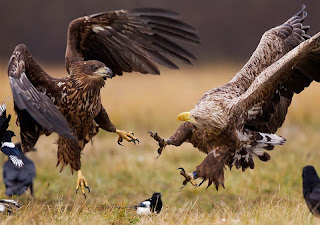 I'm not surprised; they have entirely different points of view.  The conservationists hate energy and love wildlife, the wind industry just the opposite.


The Fish and Wildlife Service has developed a regulation that would extend the length of those permits from five years to 30. That rule is now under review at the Office of Management and Budget and should be released shortly.

30 years?  Are you kidding?  They don't think they can solve the problem for 30 years?  If they write the permit that way, they won't even try hard for 25.

Link found via Hot Air.
Posted by Fritz at 7:24 PM