Remember back during the summer when Clinton insider Mark Penn advised the Democratic Party to get out of the business of identity politics if they want to win back power in Washington? Somebody clearly missed that memo at the DNC. The Daily Wire has a bit of a scoop this week with a copy of an internal announcement from the DNC’s Data Services Manager, Madeleine Leader announcing some new job openings on the committee’s data management team.

That probably sounds about as interesting as watching paint dry since both parties hire plenty of worker bees for such positions all the time. But it’s the “personal note” from Ms. Leader at the bottom of the memo which is generating the most interest. She wants party insiders to send this announcement around to interested parties so they can submit their resumes, but only to the right sort of people.


Please let me know if you have any questions or concerns and feel free to forward on to your contacts. I personally would prefer that you not forward to cisgender straight white males, since they’re already in the majority. 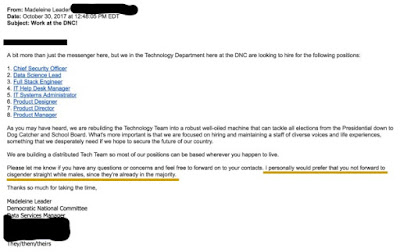 To be fair, straight white males aren't known for voting the DNC ticket either.