James Gets a B- 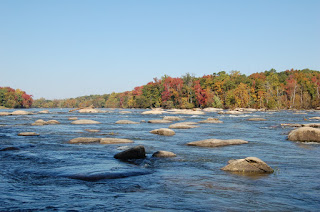 
The James River Association has measured an improvement in the overall health of the James River, retaining the 2015 grade of a B -, but increasing by three points.

Grades are based on four categories including river health, fish and wildlife populations, habitat, pollution reduction, and restoration and protection actions. Within those categories are a combined 19 indicators, 14 of which showed improvement since the previous report, while three remained the same and two declined. For example, the report shows incredible progress in regard to wastewater pollution controls, which have achieved 118 percent of the Commonwealth of Virginia’s 2025 goal.

Each of the indicators are given a score, which is then turned into a percentage to determine the grade. 2017 saw a one percent increase since the previous assessment to 62 percent, which is a rise of three points overall. Notably, this year’s grade is an increase of ten points since the report was first published in 2007.

“Increasing ten points in ten years shows that our collective commitment and investments in water quality are really paying off,” says Bill Street, chief executive officer for the James River Association. “Improvements can be seen not only in the health of the river, but also in the benefits that the river provides to the surrounding communities in terms of drinking water, quality of life and economic opportunities.”

Areas of concern include a significant decline in underwater grasses after two decades of steady expansion and struggling populations of the American shad, despite decades of re-stocking efforts.

I'm not a great believer in the letter grade system for judging progress, but it sounds like the James has made some.
Posted by Fritz at 6:07 PM