Obamacare Schadenfreude Drags On and On

Yeah, yeah, yeah: I wish this was over with, too 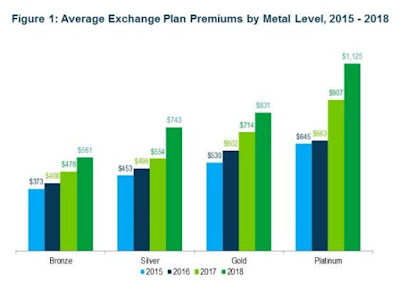 
Could we be looking at the dreaded death spiral, in which rising premiums keep pushing healthy consumers out of the market, and insurance becomes more and more expensive, until the cost of buying insurance approaches the uninsured cost of being very sick? Perhaps in the future. There’s a little-known provision of the law that prevents subsidies from growing too large: When total expenditure on premium subsidies hits 0.504 percent of GDP, the subsidies will no longer be pegged to whatever the cost of the “benchmark” Silver plan is, and will instead grow by a formula tied to inflation. If premiums rise too fast, we could hit that cap -- at which point, even subsidized people will be exposed to further premium increases, and the market will be at greater risk of collapse.

But for now the biggest dangers are somewhat less cataclysmic. The first is simply that more insurers will decide that the political and economic risks are too big, and exit the exchanges. That risk will mitigate somewhat if the CSR issue is resolved, but that doesn’t look all that likely. A judge just issued a stinging rebuke to states that sued to force the administration to make the payments, and the much ballyhooed bipartisan efforts at a legislative fix don’t look all that promising.

She also offers advice on How to Break an Obamacare Exchange: "

CBO Confirms ‘Stability’ Bill Provides A Multi-Billion-Dollar Insurer Bailout - "Overall, insurers could receive a windfall of $4 to $5 billion from the Alexander-Murray subsidies spigot. That’s plenty more than the ‘specific benefit’ to taxpayers." A billion here, a billion there, and eventually you're talking about real money. They'll find someone to take it.  Insurers make billions off Medicaid in California during Obamacare expansion.


Judge Chhabria, an Obama appointee, pointed out such inconvenient fact that nearly all of the states involved in the lawsuit had already ensured that the majority of enrollees would not be harmed by Trump’s decision to halt the payments:


The truth is that most state regulators have devised responses that give millions of lower-income people better health coverage options than they would otherwise have had… This is true in almost all the states joining this lawsuit.

His ruling on the case, which he clearly considered frivolous, concluded with this zinger:


If the states are so concerned that people will be scared away from the exchanges by the thought of higher premiums, perhaps they should stop yelling about higher premiums… perhaps the states should focus instead on communicating the message that they have devised a response to the CSR payment termination that will prevent harm to the large majority of people while in fact allowing millions of lower-income people to get a better deal on health insurance in 2018.


House Minority Whip Steny Hoyer, D-Md., admitted on Friday that it "didn't work" to try to rush Obamacare through the Democrat-controlled House and Senate in 2009 and 2010, and said that shows why Republicans shouldn't try to rush a tax bill.

"Yes, we're replicating the Affordable Care Act," Hoyer said on the House floor about Republican plans to rush through its tax bill. "Put on the table, quickly passed, jammed through, sent to the Senate, and it didn't work."

Late this afternoon CBO will publish an updated estimate of the effects of repealing the individual mandate requiring people to have health insurance meeting specified standards and that imposes penalties on those without an exemption who do not comply.
In that document, CBO and the staff of the Joint Committee on Taxation estimate that repealing that mandate starting in 2019 would reduce federal budget deficits by $338 billion between 2018 and 2027 relative to CBO’s most recent baseline. Other information about the policy’s effects on the budget, health insurance coverage, and premiums will be included in today’s report.

That would go a long way to solving a problem that has split the Republican caucus in the Senate. In fact, it might get Republicans all the way across the finish line, assuming they take advantage of it. In order to qualify for reconciliation, the finished tax reform bill cannot add to the deficit outside of the boundaries of the recently passed budget resolution, which has a 10-year, $1.5 trillion deficit, which was controversial enough to draw a no vote from Rand Paul last month. If the red ink goes beyond that point, the bill can’t qualify for reconciliation.
. . .
In the long run, though, Senate Republicans may be very leery about the impact of repealing the mandate while leaving the rest of ObamaCare in place. If the death spiral accelerates and the markets collapse, they’ll get the blame, and that might take place just as voters go to the polls next November. Would any of the balkers over the summer suddenly take that risk? Susan Collins? Lisa Murkowski? John McCain? Bueller? Bueller?

Trump can even make Obamacare work (slightly) better: ObamaCare signups surge in early days to set new record. But not all of it: That Maine Medicaid Expansion Isn’t Happening Just Yet