And Perhaps the Most Disgusting

So how does this happen?

That the politicalization of journalism has reached fashion magazines — which exist as advertising vehicles for cosmetics, clothing brands, etc — shows that the radical Left’s influence in academia cannot be restricted to university campuses. Young people who are indoctrinated with feminism and other “social justice” ideologies in the classroom will take those ideas with them into the workplace after they graduate. The academic Left is intolerant of dissent, and intellectual conformity is enforced on campus, so that even if Teen Vogue had wished to hire college graduates who are critical of feminist ideology, they would have had difficulty finding them. So why did the editors of Teen Vogue wish to tutor young girls about anal sex? Perhaps because the magazine’s digital director is a young gay man, Phillip Picardi and, beginning in 2015, the magazine deliberately decided to shift its focus to “activism” and identity politics:


“I am an activist [said the magazine’s editor Elaine Welteroth]. And I think the readers that we reach would all consider themselves activists, too.”
What issues are most important to their young readers? “Identity is big. We want to help make them feel better about themselves, whether that’s giving beauty tips, or empowering them with political information to have smarter conversations and feel they can stand up for themselves.”

That identity-politics activist mentality worked out about as well for Teen Vogue as it did for Hillary Clinton’s presidential campaign.

The politicization of the magazine lead to a mother's campaign to shut down the magazine:


If you want to talk about empowering women, you must talk about Elizabeth Johnston, “The Activist Mommy” who led the boycott against Teen Vogue:


I was beyond thrilled to learn today that Teen Vogue magazine will no longer be in print. The publisher, Condé Nast, has shuttered the print publication, while other Condé Nast publications will remain in print. Operation Pull Teen Vogue was a grassroots campaign by concerned parents who don’t believe anal sex and sex toys should be peddled to their children under the guise of a fashion magazine. Teen Vogue editors Elaine Welteroth and Phillip Picardi ignored our concerns and mocked our campaign, but we gave them a black eye from which they never recovered. Let the watching world take note: If you pander obscenity to our kids, especially for a profit, we will destroy you.

When this controversy erupted in July, Teen Vogue‘s Picardi openly boasted of his pro-homosexuality agenda: “Gen Z will be our queerest and most fearless generation yet,” and posted this to Twitter: 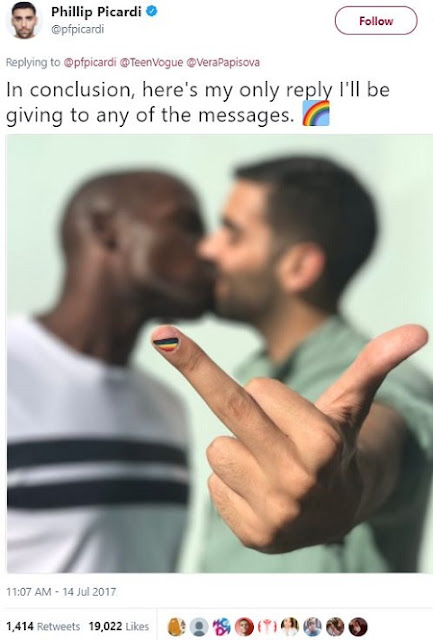 It's hard to know if the mother's campaign contributed to the demise of the print version of Teen Vogue; magazines are dying left and right as the internet drains their blood, but it certainly didn't help. To Picardi: