I started with a flasher but Imaging sonar has gotten pretty good lately:


The NOAA Chesapeake Bay Office recently did some work mapping critical habitat for endangered Atlantic sturgeon in Virginia. While surveying a 5 km stretch of the James River, using side-scan sonar, they captured this image, which includes 13 sturgeon. Sturgeon are visible as the light “contact” streaks; dark shadows of those fish appear in the lighter area along the righthand side of the image.

I guess a B- is good enough for sturgeon.


While under way, the team observed multiple sturgeon breaches, part of a possible fall spawning run. NCBO’s efforts related to habitat support a larger NOAA effort on sturgeon. For example, NCBO’s sonar work and habitat analysis in the Nanticoke River and Marshyhope Creek (Maryland) were used by the Office of Protected Resources as they developed Final Rule designating critical habitat for Atlantic sturgeon.

I've seen big Striped Bass on Pete's side scan sonar. I've tried on my own, and never had the right opportunity. 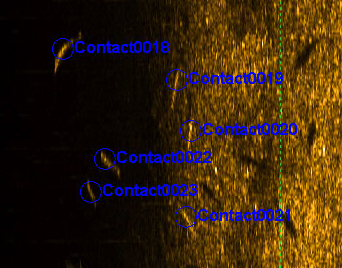