Reason #5771 That Trump Was Elected

List Of 140 Colleges With Endowments Greater Than $100,000 Per Student That Would Be Subject To GOP's Proposed 1.4% Tax On Investment Income

In a sweeping plan to rework the tax code unveiled on Thursday, Republicans in the House of Representatives floated a new strategy for raising revenue: Tax college endowments.

Some college endowments, that is.

Deep within the plan — look here, on Page 75 — is the language that spells out which institutions would be affected. The bottom line: Only the most-affluent colleges need worry. Colleges would be subject to the tax, set at 1.4 percent of net investment income, only if their endowment assets total at least $100,000 per student.

How many colleges does that leave? About 140, according to a Chronicle analysis. ... The following chart shows the 200 private institutions with enrollments of 500 or more, ranked by the value of their endowment per student. Values marked in yellow indicate that they would make their institutional endowments subject to taxation. 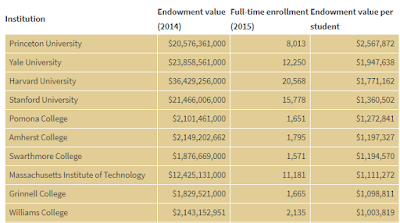 The amount of money tied up in the big college endowments is staggering, and it's rarely use to help students pay for college.